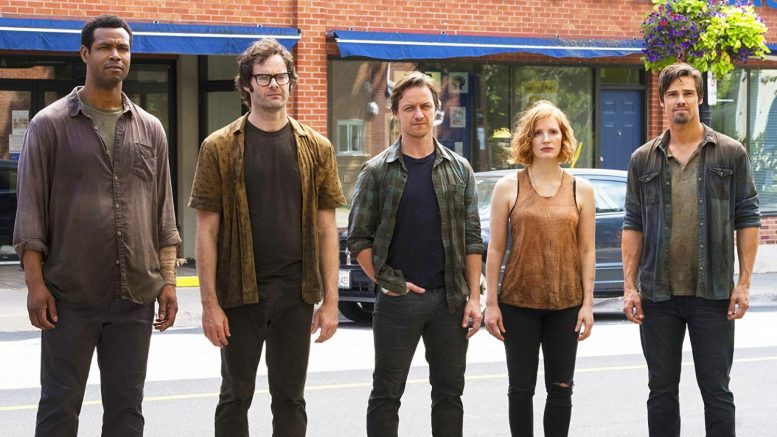 2017’s “It” proved to be a successful standout in a Hollywood industry filled with reboots, spinoffs and remakes. Currently standing at an 86% on Rotten Tomatoes, the first installment of the modern-day “It” franchise delivered with great chemistry between the main cast members, creative scares and a terrifying performance from Bill Skarsgard as Pennywise the Clown.

With “It” making $700 million in worldwide box office earnings, a sequel was inevitable this time with an entirely different cast than the original.

“It Chapter Two” was released just two years after the original film on Sept. 6, and currently holds a 64% on the Rotten Tomatoes meter, significantly less than the rating for the first film. The mediocre rating may have to do with the film’s runtime, which is two hours and 49 minutes. That exceeds the length of the first film by 23 minutes.

While trying to honor Stephen King’s source material—which is over 1,000 pages long—the sequel overstays its welcome and is slightly drawn out.

“Chapter Two” centers around a grown-up “Losers Club” (Beverly, Richie, Eddie, Mike, Bill and Ben) as they reunite in Derry, Maine 27 years after the events of the first film to take on Pennywise once again. Despite the intense fear the main characters feel once they hear about the return of the shape-shifting clown, they return to their former hometown because of the oath they swore by at the conclusion of part one.

Just like “Chapter One,” the comedic banter and chemistry between the main characters is one of the most effective elements of this film. Richie (played by Bill Hader) is easily the funniest and most endearing character of the movie. However, the innocent charm of the young cast in “Chapter One” may have been more effective for some viewers.

Pennywise’s shape-shifting ability also makes for some fun environmental scares in “Chapter Two,” transforming into what scares his victim the most and feeding off of their fear. He likes to play with his food, and that is what makes him so terrifying as an antagonist.

The extra time in “It Chapter Two” can be quite noticeable throughout the movie. While there are plenty of scares and haunting sequences throughout, these scenes may seem a little repetitive, dragging the film out and making it longer than it really needs to be.

The “Losers Club” often split up during the movie, giving Pennywise a chance to haunt them individually. This takes up a good portion of the movie, and while these scenes are creative and cool, they don’t really feel all that scary.

What makes the “It” movies good are the main characters. Both films do a great job at attaching viewers to the characters and making them actually matter. Without this, “It Chapter Two” would just be another standard horror movie. Fortunately though, the character development lifts this film to an above average level.

Opinion: California should be appreciated for what it really is

‘It’ brings Pennywise back better than ever