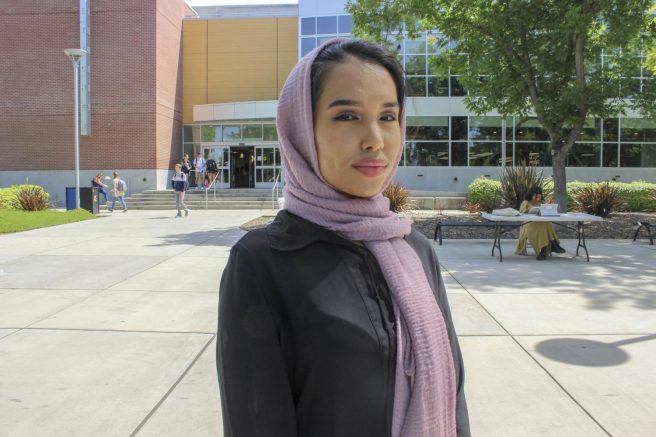 Psychology major Fatimah Ahmadi is an Afghan student at American River College. Ahmadi says she wants the role of Afghan women in Afghanistan to be in the public sphere. (Photo by Hameed Zargry)

On Sept. 21, Secretary of State Michael Richard Pompeo appointed United States diplomat Zalmay Khalilzad as the Special Representative for Afghanistan Reconciliation. Since then, Khalilzad met the Taliban several times in Qatar to discuss the end of America’s and Afghanistan’s 17-year long war. One of the more prominent concerns of the discussion was the position of women’s roles in the future Taliban presence in the government.

Seventeen years of conflict ended with Afghan women gaining the opportunity to get an education, having freedom and being able to work side by side with men in their field. Now, women also participate in different national and international sports games that they were previously banned from under the Taliban government.

According to the France Press Agency, the Taliban does not want women to go to school. According to the AFP, girls’ schools are burned and bombed and teachers, principals, students and their families receive “warning letters about not attending school.” According to a report, in the past two decades, hundreds of schools were burned out. In 2012, the average schools burned were 310.

The Taliban’s strict rules and restrictions caused a large number of Afghans to migrate towards neighboring countries in Afghanistan. Those who remained in the country grew up with no education and were forced to accept the strict rules.

Fatimah Ahmadi is a psychology major at American River College. I interviewed her to get more information about how she feels about the past and future government with Taliban.

“Since the Talibans were created in Afghanistan, the country has changed forever,” Ahmadi said. “[Taliban] are radical extremists living in the mountains of Afghanistan preying on anyone who are not following their false rule they created by themselves for Islam, targeting mostly the minority group of Afghanistan.”

The majority of women in Afghanistan like Ahmadi have experienced these rules of the Taliban.

The concerns are further raised when we see the lack of women in the recent United States and Taliban meetings in Qatar.

Angelina Jolie, an actor and United Nations High Commissioner for Refugees Special Envoy, addressed this specific point in her last speech at the United Nations ministerial meeting on peacekeeping at U.N. headquarters in New York on March 29.

“There can be no peace or stability in Afghanistan or anywhere else in the world that involves trading away the rights of women,” Jolie said.

According to the report, Jolie pushed for women to be part of Afghan peace talks occurring in  Afghanistan.

I believe women’s efforts in the last 17 years in Afghanistan have been very important. Women have played a key role in the development and progression of the country and not involving them in peace deals and future negotiations could possibly set them back a decade to when women did not have any respect and rights.

“As [an] Afghan female living in the United States, I want the role of Afghan women in Afghanistan to be in the public sphere,” Ahmadi said. “The more educated women are, the better it is for Afghanistan’s improvement.”

The biggest concern is women’s presence in the peace negotiation happening between the U.S. and Taliban. Not counting on women’s input in any peace talks means making decisions on Afghan women’s destiny without their presence, is a hundreds-years-old culture that could not result in bringing peace in Afghanistan.

Consequently, after the U.S. spent over a trillion dollars, and thousands of military lives to bring peace and stability in Afghanistan, the fight for gender equal rights could be lost.