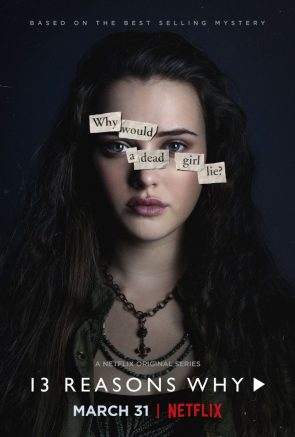 "13 Reasons Why," is a Netflix original series based on the novel by Jay Asher, that follows teenager Clay Jensen, in his quest to uncover the story behind his classmate and crush, Hannah, and her decision to end her life.

“13 Reasons Why,” a Netflix series based on the novel “13 Reasons Why” by Jay Asher published in 2007, is a story about a high school girl who leaves behind 13 cassette tapes for the people who led her to commit suicide.

Now that’s some heavy clickbait. There is a lot to ruminate on once you’ve finished the season and as hyped up as it is I will be one of the people to say “13 Reasons” is not doing what it intended to. I believe its intentions were to shine light on teen suicide, the effects of bullying and the importance of having a strong support group.

Instead I just ended up feeling resentment for Hannah.

And yet they went against his better judgement. This is especially harmful to younger adolescents. It not only romanticizes suicide but Hannah’s last moments. It shows a way that they too could end their lives.

“13 Reasons why” is well-done; the storytelling is dramatic and pulls kids in, while relating to them. That makes it more dangerous,” Reidenberg said.

But my final summation is there is no hope for this show actually having redeeming enough qualities to be a positive influence for its targeted age group. I wouldn’t recommend any parent to allow their child to watch it. I don’t think most adolescents are mature enough to analyze it any deeper than its face value. We need to stop glorifying suicide and self harm. 10 times out of 10 I can guarantee anyone’s attempt to recreate Hannah’s suicide tapes will be a failed attempt to resolve anything… because it’ll be too late.