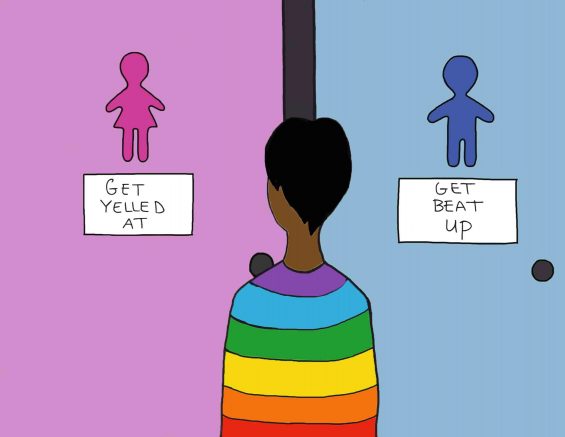 If you take a closer look around American River College’s campus you might notice restroom signs that are currently ‘under construction.’

Gender neutral signs will spread across ARC in the near future. This change cannot come fast enough.

As Bob Dylan once said “The Times They Are A-Changin’” and it shouldn’t take a Dylan connoisseur to understand that.

The social justice warrior movement has become as commonplace as the newest iPhone for many millennials and beliefs and attitudes about gender are changing.

“In a 2015 Fusion poll, the network found that half of young people no longer believe in a binary concept of gender. For a new generation radically thinking gender boundaries, the status quo isn’t enough,” said Nico Lang, a contributing writer for Daily Dot.

But this attitude is not limited to those born in the 1990s.

Although those in favor of gender neutral restrooms tend to have a fervent passion on the subject, that doesn’t mean there haven’t been or continue to be many challenges and roadblocks.

So to speak, the wave that is crashing is hitting hard and the ones riding it are as passionate as ever.

Those who wish to stay on shore oppose this integration for not only personal beliefs but ones they say are sensible.

“One practical reason we can’t change to unsegregated bathrooms overnight is that municipal, state, and federal legal codes, many with origins in the 19th century, mandate that there be separate facilities for each sex, in businesses and places of work,” Jeannie Suk Gersen, a contributing writer for The New Yorker and a professor at Harvard Law School said.

Meanwhile, the opposite end of the shore is crowded with transphobic people who believe putting this change into effect will increase crime rates, primarily sexual assault cases.

“It shouldn’t take a rocket scientist to see that telling men they can suddenly decide they ‘feel’ like a woman and thereby use women’s bathrooms is a slippery slope to more of all types of these sexual crimes,” says Elizabeth Lee Viliet, a practicing physician with specialty training from the Johns Hopkins Sexual Medicine Consultation team.

The history behind restrooms is more complex than some may think.

Gender-segregated restrooms “arose in the Victorian era, along with widespread plumbing, meaning they’ve been around almost as long as the modern bathroom itself,” according to Stephanie Pappas, a contributor to  Livescience,  a science news website.

During this time, the belief was born from, “the growth of women’s presence in public life,” which in turn “led to the desire to protect women from the crude dangers of the male world,” Gersen said.

Today that old “tradition”is being challenged and ARC is making strides to protect rights, specifically those of the transgender community.

It is important to understand that “transgender people challenge the notion that a person’s gender and their biological sex at birth are one and the same in all cases,” said Harvey Molotch, a sociologist at New York University.

A logo change may seem trivial and unimportant to some, but it is clearly more complex than just switching out signs.

For those who aren’t transgender, there are still many viable reasons to campaign for the endorsement of gender-neutral and all inclusive restrooms. The endless lines at the women’s room will shorten, there won’t be any confusion as to where the male or female restrooms are and, from a more humanistic approach, non binary and transgender people will feel comfortable.