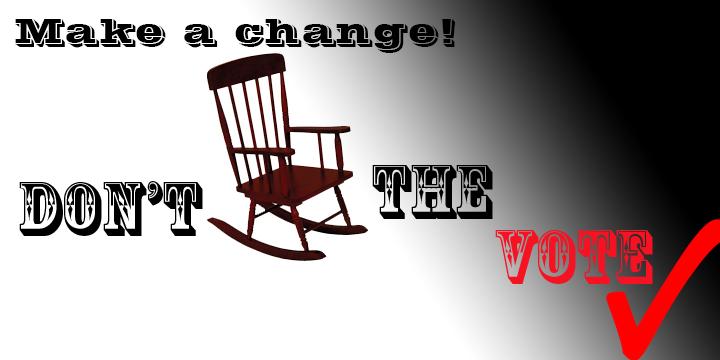 With so much emphasis placed on the presidential election, the impact of more local political efforts are often overlooked. (Illustration by Allante Morris)

Every four years, Americans hear the familiar battle cry—“voting is your civic duty.”

Thanks for the reminder, but America’s democracy just isn’t cutting it any longer.

With the presidential election coming up this November, there are rally cries across the nation to bring more Americans to the polls.

However, if voter trends as reported by Pew Research Center hold true, only about half of registered Americans will vote, and the United States will continue to have the fourth lowest voter turnout in the developed world.

Among the endless, circular, stale arguments attempting to convince the populace to vote on the basis of idealist freedom and democracy, there are few clear reasons as to why so many of those eligible do not vote.

It’s simple: Americans don’t vote because they are dissatisfied with the system.

Your vote is mathematically meaningless. A single vote doesn’t make a difference, and politicians don’t care about one vote.

They care about thousands upon thousands of votes: the votes of people who pick from the candidates presented to them like starter Pokémon and blindly subscribe to the person who has the most in common with their beliefs.

If there are issues and policies that really matter to you, speak to your congressional representatives—they cater to their districts, where your voice as a citizen makes a bigger difference.

It’s your representative’s job to care about what their constituents want and need locally, rather than a presidential candidate who has to attempt to broadly appeal to millions.

If you want to make the biggest possible impact, do it here on campus. American River College’s voter turnout is about half of one percent of eligible voters.

In a school population that hovers around 30,000, last week’s election for our student representatives failed to get even 200 votes.

With a disengaged student body, it’s beyond simple to make change on campus. Just go to an Associated Student Body (ASB) meeting and present your ideas.

ASB elections, however, are not a microcosm of American elections.

American presidential elections are decided behind closed doors by wealthy donors. Wealthy campaigns bring votes, so rich donors have their pick of politicians willing to promise them political favors in exchange for funds.

The United States is effectively an oligarchy, run by a small group of wealthy and powerful people. The candidates change with each election—the donors do not.

Their funds are spent disproportionately in battleground states by candidates who suddenly care very much about the issues important to those locals, sometimes despite their established histories on those issues.

Changing stances on the issues is common for politicians, and even if a candidate from your chosen party gets into office, there’s no check to ensure they keep the promises they made on the election trail.

While campaigning, solid “red states” or “blue states” are assumed to align with their usual preference and are often ignored by the candidates for states that are more likely to make a difference in their campaign.

This leads to indecisive states having a greater influence on politics in this country; for example, according to the Princeton Election Consortium, in 2012 a vote in Nevada was over one million times more likely to impact the outcome of an election than a vote in New Jersey.

In a state as historically liberal as California, it would take a literal revolution to change the state’s allegiance.

Voting in the presidential election in California is like adding one piece of hay to the haystack and claiming you built it, and then saying the needles had the same fair chance.

This government can work for the people, but only if the people speak up.

If you want to make change in this community, state or country, make change by doing good deeds and contributing to the local economy. Make change by speaking to your representatives and encouraging others to do so. Make change by organizing people to demonstrate and protest against injustices.

Do not attempt to make change by playing a game that you’re aware is rigged, and then complaining when you lose.

Be the first to comment on "Opinion: Voting doesn’t make change, people do"