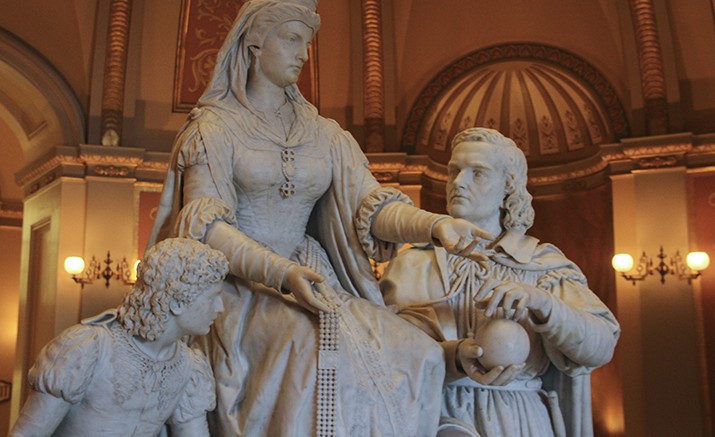 The marble sculpture 'Columbus' Last Appeal to Queen Isabella' sits under the rotunda of the California State Capitol. The sculpture was crafted by sculptor Larkin Goldsmith Mead at his studio near Florence, Italy and was donated to the capitol in 1883. (Photo by John Ferrannini)

Nine cities in the past two months have joined several states and municipalities in ending their observances of Columbus Day, which celebrates the landing of Columbus’ fleet in the New World in 1492, an event which heralded the colonization of the Americas.

These moves come as society comes to grips with the atrocities committed by the European settlers.

Three writers from the Current have weighed in on how Columbus Day should be commemorated and on the responsibility Christopher Columbus himself bears for crimes against Native Americans.

Joseph Daniels: Columbus Day should be changed to spread awareness of Columbus’ atrocities

Instead of replacing Columbus Day with Indigenous People’s Day, Columbus Day should be altered from honoring Christopher Columbus’ discovery of the Americas to spreading awareness of the crimes that he and his men committed against the native population.

While it is important that Native Americans have holidays to celebrate their culture, it is equally important for the nation to be reminded of the pain and suffering that people had to endure in the name of conquest.

Some people’s perception of Columbus – and this may have to do with the fact that the United States has a day to celebrate the man’s memory – is that he was simply the man who simply discovered the Americas.

But the argument that the blood is not on Columbus’ hands is a false one.

“It is time to stop treating Columbus as the hero that textbooks depict him as and see him for who he truly was: a murderer.”

Columbus had written a letter to Luis de Santangel, the person who helped fund Columbus’ voyage, that promised natural resources and slaves.

According to historian Howard Zinn, during Columbus’ second voyage to the Americas, his men rounded up members of the Arawak tribe and held them in pens. They then selected men whom they thought would make the best slaves, and shipped them to Europe.

As a result of the large number of the slaves who died en route, Columbus ordered the Native Americans to search for gold. Those who completed this task were awarded a copper coin to be tied around their neck.

Columbus’ men hacked the hands off of the ones who were unable to show proof that they found gold.

While Columbus is not responsible for the forced relocation or bounties that were placed for a scalp, he did set a precedent for how the Native Americans would later be treated.

That Columbus was in a time period when it was acceptable to murder and to enslave people is an unacceptable argument for him. What this does is tries to cleanse Columbus of any of the wrongdoing he committed.

It is time to stop treating Columbus as the hero that textbooks depict him as and see him for who he truly was: a murderer.

While there is nothing that could be done to bring those who died back to life, it will be a tremendous step in acknowledging this country’s past sins.

Every Columbus Day, people go on their Twitter and Facebook to express outrage that the post office, banks and other institutions take the day off to commemorate the man whose discovery of the Americas heralded the deaths of many Native Americans.

That truth is that Columbus Day is an example of how much maligned minority groups can become so mainstreamed in America that once ingrained prejudices have more or less disappeared.

Columbus Day was first observed as a state holiday by Colorado in 1907. Six years earlier, in what the Library of Congress calls “the largest single mass lynching in U.S. history,” 11 Italian immigrants were hanged in New Orleans by an angry mob.

Immigrants in general, and Catholic immigrants of Italian or Irish origin in particular, were described by politicians in terms that would make Donald Trump blush.

Theodore Roosevelt, who served as president of the United States from 1901 to 1909, said that “the average Catholic Irishman of the first generation” was a “low, venal, corrupt and unintelligent brute” with “a great deal of stupidity.”

“Columbus Day can be better understood in light of recent scholarship, but the holiday never ultimately symbolized the historical deeds of Columbus himself.”

The nativism that flourished from the 1840s until the 1960s reached a high point when, in 1924, the Johnson-Reed Act put a limit on the amount of immigrants that would be allowed into the United States.

The quotas notoriously allowed only very low numbers of immigrants from Italy and nations with large Jewish populations. The act remained law for the next 40 years.

Although he sailed under the flag of Spain, Christopher Columbus was born in what is now Italy.

Columbus Day, which became a federal holiday in 1937 after heavy lobbying from Catholic organizations, became a day on which the marginalized immigrants and their children could affirm that they were Americans too.

In the intervening years, especially after the 1960 election of Catholic John F. Kennedy to the presidency, that mighty torrent of prejudice has dwindled to a trickle.

The inane anti-immigrant vitriol once aimed at Italian and other European Catholic Americans has moved on to target more recent arrivals from the developing world. 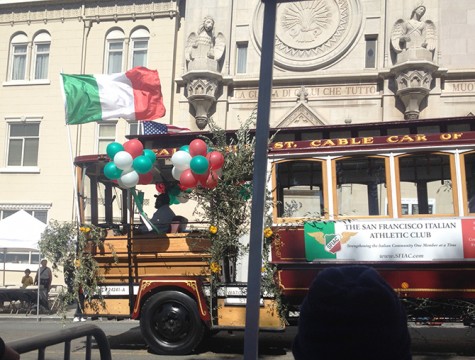 A trolley representing the San Francisco Italian Athletic Club passes in front of Saints Peter and Paul Catholic Church in San Francisco during preparations for a parade commemorating Columbus Day on Oct. 13, 2013. (Photo by John Ferrannini)

Today, it is also far better known to historians and to the public that Columbus committed atrocities during his four trips to the Americas.

It is a good thing that we view history as more nuanced than simply the struggle between good and bad people, but the intensity of the cry against Columbus is very high considering that many of our national heros were also deeply flawed individuals.

George Washington, our first president, and Thomas Jefferson, who said that all men are created equal, owned slaves.

Franklin Roosevelt, the great symbol of American liberalism, rounded up 120,000 Japanese Americans and sent them to live in internment camps during World War II.

Barack Obama is already criticized for arguably imperialistic policies that fail to adequately safeguard human rights at home and abroad.

These men being imperfect doesn’t mean they weren’t or aren’t worthy of praise in other areas, but people are often more valuable for the principles they symbolize.

Columbus Day can be better understood in light of recent scholarship, but the holiday never ultimately symbolized the historical deeds of Columbus himself.

The observances of Columbus Day should be re-thought and brought into the 21st Century; but in a year of renewed nativist hysteria, hopefully those who are against Columbus Day will take heed and turn what they see as a symbol of oppression into a symbol of empowerment.

That historical revisionists have blamed Christopher Columbus for things that he never did and credited him for history he had no say in has resulted in Columbus losing favor and having his holiday being abolished across our great country.

Let’s clarify the first myth of the first voyage: that the people of the 15th century believed the world was flat.

Eratosthenes was a mathematician from Cyrene, a Greek colony, who estimated the circumference of the earth was 24,000 miles about 2,000 years ago, although Columbus thought the distance was 14,000 miles.

All of Europe was trying to find a quicker trade route to Asia, and if Columbus didn’t head west, someone else would have.

“To blame one person for doing his job for everything that has happened since his discovery is just wrong.”

Christopher Columbus was an explorer. It was his job. He didn’t settle any colonies nor did he drop off any settlers, he just thought that he had reached Asia.

Columbus took four voyages to the New World and never found what he was looking for.

The two countries that settled the New World were Spain and England, who were responsible the damage that Columbus is credited for.

Columbus sailed under the Spanish flag and was funded by King Ferdinand and Queen Isabella of Spain and, to be fair, Columbus took one disease back from the new world to Europe which was syphilis and that brought a lot of misery with it.

After his fourth voyage, he was fired because he didn’t complete his mission. Columbus hadn’t found a new trade route to Asia.

Captain Ferdinand Magellan and his navigator Juan Sebastian Elcano were the first explorers to reach Asia, landing in the Philippines. Magellan was killed but Elcano completed the voyage in 1522.

Hernan Cortez conquered the Aztecs telling the king of Spain that Mexico was dripping with gold.

People have always wanted to know what they don’t know.

People are curious. Exploring is what we have always done from the beginning of time and will do as long as we are here on this earth.

To blame one person doing his job for everything that has happened since his discovery is just wrong.

Read, write and blue: ARC professor recounts his past with the Blue Man Group

Be the first to comment on "Debate: How should Columbus Day be commemorated?"