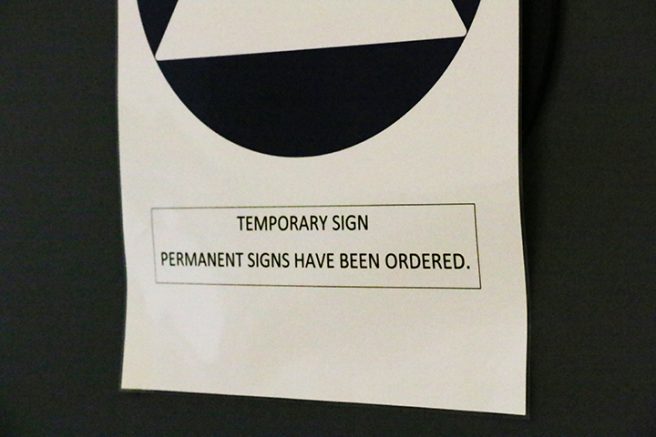 Students who need to use the bathroom may have noticed something different on campus recently: Gender neutral restroom signs are currently ‘under construction’ at American River College.

Once administration clarifies what the state social standards are for the signs, ARC will be out with the old and in with the new.

“The signs will get up sometime next week,” Vice President of Administrative Services Administration Kuldeep Kaur said.

The changes are being put into place thanks to a new bill.

Bill AB 1732 also known as The Health and Safety Code 118600 “requires all single-user facilities in any business establishment, place of public accommodation, or government agency to be identified as all-gender toilet facilities,” according to a press release emailed by ARC’s President Thomas Greene on March 1.

The week prior to Greene’s email “the U.S. Departments of Education and Justice ,rescinded previous guidance concerning transgender students’ use of restroom facilities,” according to Greene’s press release.

Unlike the USDO, ARC strives to “be sensitive to the needs of our campus,” ARC’s Public Informations Officer Scott Crow said.

Within the last few years, the rights of the LGBTQ community have caused a lot of controversy —controversy that’s fueled the fire on both the far-right and far-left sides.

The bill also defined “sex” as “the physical condition of being male or female as shown on an individual’s original birth certificate,” Wheatley wrote.

On Jan. 4, Equity Virginia’s Communications Director Joseph Papa at Equality Virginia said via press release: “[They] strongly oppose [the] bill that would cause immediate harm to our transgender community and economy.”

Those who support the bill such as John Rustin, president of the North Carolina Family Policy Council have made points that primarily revolve around the safety of women and children.

“The bill is important because it protects the privacy and dignity of women and children,” Rustin told ABC News.

He added that allowing transgender people to use whichever bathroom they wanted would “allow men and potentially predators to enter into those facilities with ill intentions. It’s a common sense privacy and safety law. Men go into men’s restrooms and women go into women’s restrooms.”

Then there are the longstanding issues that are growing for the transgender community each day.

Since the act of not allowing transgender people to use the bathroom that aligns with their gender identity then by default it is discriminatory.

In a recent CNN article, contributors Emanuella Grinberg and Dani Stewart argued that transgender people should have the option and freedom to use the bathroom of their choosing.

“As of March 2017, 19 states, the District of Columbia and more than 200 municipalities have anti-discrimination laws and ordinances allowing transgender people to use public facilities that correspond to their gender identity,” they wrote.

Now that ARC is implementing more gender neutral restrooms the campus is joining 200 municipalities that support the rights of transgender people.

“This is something our district endorses.” “We want to have the space welcome and inclusive for all students,” Kaur said.