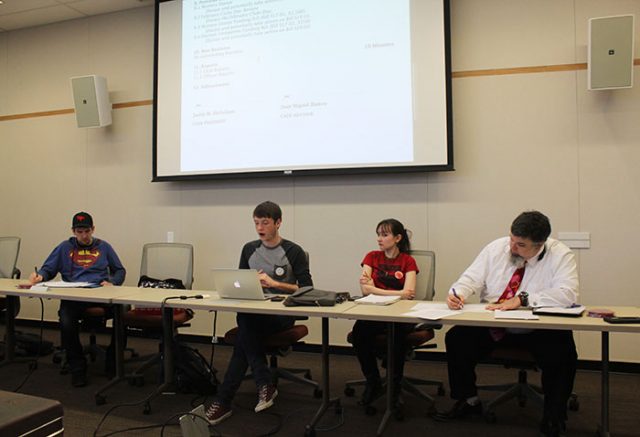 The Clubs and Events Board had a sweet start to its Valentine’s Day meeting by passing out heart shaped boxes of chocolates to members in attendance, which came in contrast to the discussion of an increase in parking fees starting this summer.

Student Senate Adviser Juan Blanco informed board members during his welcoming speech that student election packets will be available next on Tuesday Feb. 21, for those interesting in running for Student Senate or CAEB. Applications will be due on March 14.

CAEB President Justin Nicholson reminded board members that with the student elections coming up, they need to start thinking about next year’s board, including who’s going to be on it and what they will be doing.

Blanco also informed board members that it’s their responsibility to let constituents know about the $5 increase for parking passes starting this summer session.

According to the information packet passed out during the meeting, the price of semester decals will go up from thirty-five dollars to forty dollars while daily ticket prices for parking will remain the same at two dollars.

Motorcycle parking passes will also see an increase from $20 to $25 during the regular school semester starting in the fall.

With no questions or objections, the board appointed Bruce Rand to be Director of Communications.

Rand previously served in the same position, and when asked if he had anything to say, he said “it’s my birthday,” to which members responded by wishing him a happy birthday.

When asked if the board had any comments or concerns about this month’s Club Day, Rand said he thought it went off “without a hitch,” to the agreement of other members.

Vice President Mary Stedman suggested that in the future, CAEB ought to have a backup plan for having Club Day indoors like they had this month due to bad weather and rain.

“I think it went pretty well especially since our Club Day was kind of last minute in terms of having to move it inside; however, I think in the future if we want to keep our Club Day successful … have that backup plan for each Club Day of what it’s going to look like indoors because we never know exactly what the weather is going to be like,” Stedman said.