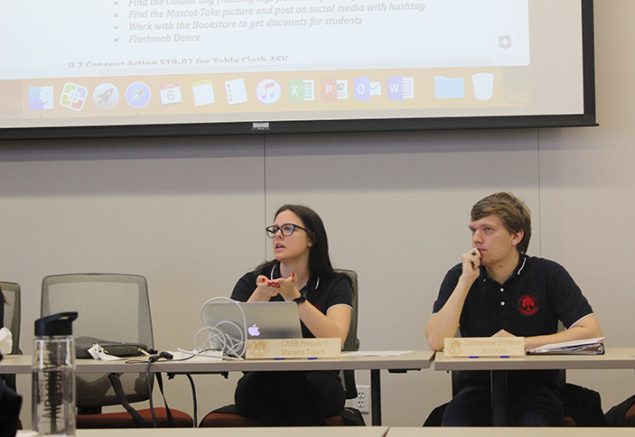 Club and Events Board President Mariana Topich and Comissioner of Finance Jacob Kohl discuss the agenda of a meeting on March 6th at ARC. (Photo by Alondra Botello)

The first things discussed at the meeting were the Associated Student Body elections happening in April. Club Advisor Juan Blanco encouraged the members of CAEB club to spread the word about ASB applications. The application is due March 19.

At Club Day, ASB hosted an event called “coffee with ASB” which gave students a chance to meet and chat with those already in office. The intention was for anyone interested to get their questions answered by an ASB representative according to Blanco.

“We need more people for CAEB,” Blanco said, “and that is why they are trying to spread the word as much as possible.”

CAEB president, Mariana Topich,says she knows what type of candidate should apply and serve on the board.

“What [do] I look for in a candidate? Somebody who is disciplined, who is able to plan events, [who is] able to hold two office hours a week [and] is able to work on campus,” Topich said.

One of the most important things that candidates should have, according to Topic, is a positive attitude.

Although CAEB is looking for new members they were able to fill one spot at the meeting.

Kim was born in Seoul, South Korea and moved to the United States when he was younger.

“I lived in the East Coast in Philadelphia and New York and I did my bachelor’s degree and after working I finally moved to Sacramento,” Kim said.

The board then discussed how a club should reserve a table on Club Day as well as the theme.

Since it is Women’s History Month, each table was given incentive points if they participated by showcasing a picture and a paragraph about a woman who has influenced their club in one way or the other.

Following that discussion was the approval of the Beaver Week spirit days in April.

Some of the spirit days include Jersey Day and School Colors day.

The official days and their themes will be released soon.

At the end of the meeting the Modern United Nations club requested funding for the MUN conference. The funding was approved and the meeting was adjourned.

Alondra Botello is a second-year student at American River College. This is her first semester writing for the Current. She is working on her associates degree in journalism. Outside of school she can be found singing or creating something new for her personal Instagram. She will be transferring to California State University, Sacramento in the fall.

Be the first to comment on "CAEB Welcomes new Vice President"