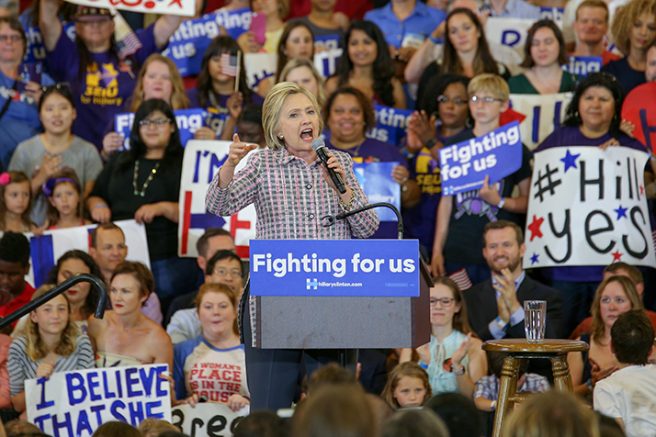 Presidential candidate Hillary Clinton speaks to the crowd during her campaign event at Sacramento City College in Sacramento, California on June 5, 2016. (Photo by Kyle Elsasser)

The rally was attended by thousands of supporters who waited in a long line outside the event, but only a few hundred were allowed inside the college’s gymnasium, where the rally was held.

Current and former American River College students attended and talked about their support for — and opposition to — Clinton.

“One of the main reasons I’m voting for her is because I remember growing up when the economy was great under Bill Clinton,” said Sonia Franco, who just finished the nursing program at ARC. “I think she can improve our economy, so that I can have a chance to advance in the workforce.” 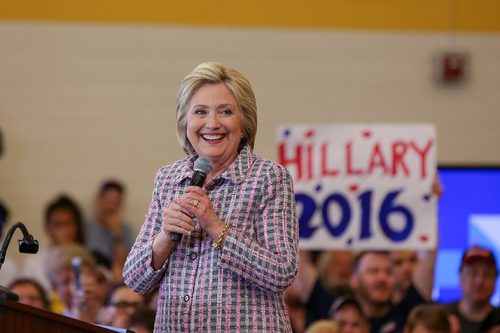 Presidential candidate Hillary Clinton smiles at the crowd during her campaign event at Sacramento City College in Sacramento, California on June 5, 2016. (Photo by Kyle Elsasser)

One former American River College student was at the rally as a supporter of Republican frontrunner Donald Trump.

“I’m a union civil engineer so it would actually behoove me to vote for Hillary,” said Brian Gutierrez. “ … I see Trump as revolutionary and Hillary as some of the same.”

The rally hosted 11 speakers, including Clinton.

One of the speakers was Sacramento Mayor Kevin Johnson, who has been under scrutiny recently for sexual misconduct allegations. He walked on stage and received applause mixed with booing from the crowd. 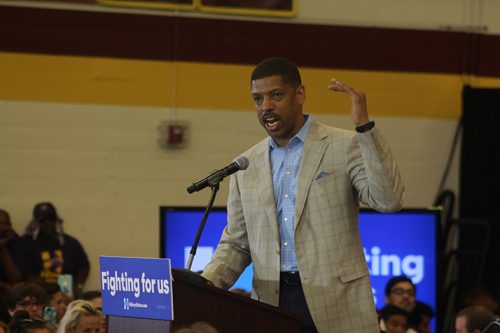 Sacramento mayor Kevin Johnson speaks at a campaign event for Hillary Clinton at Sacramento City College on June 5, 2016. Johnson received audible boos from the audience as he took the podium. (Photo by Mack Ervin III)

All the speakers voiced their support for Clinton, her experience and her stances on issues like climate change, healthcare and the minimum wage.

Also a popular topic, multiple speakers voiced their support of Clinton’s past, her voting record and specifically, her history working as an advocate for children.

“There’s no child advocate better than Hillary Clinton. She fought for children as a top attorney coming out of Yale Law school,” said Pan. “She used her talents to fight for children, for families, for all of us. … That’s the kind of activism we need to lead our country, and certainly for a community like Sacramento.”

“Glee” actor Darren Criss said the rally was “not just for her, it’s for us. … For the people outside (the rally), to fight for her so she can fight for us.”

Clinton walked on stage with and was introduced by Matsui.

Matsui said Clinton has “a powerful vision about how to move our country forward” and said Clinton’s “leadership (is) driven by perspective as advocate, public servant, mother and grandmother.”

“She will go into the oval office on day one and take charge,” said Matsui. 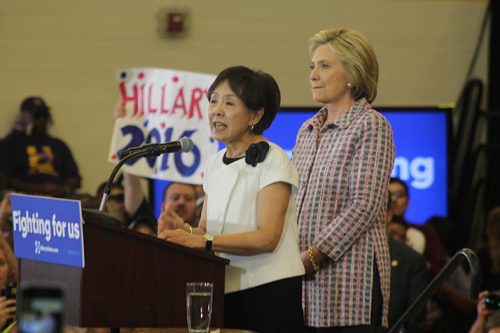 Clinton’s speech discussed the issues that have been popular this election cycle, listed Hillary’s history on issues and gave reasons why Republican presidential frontrunner Donald Trump is unfit for office.

“It is a great treat for me to be here in Sacramento two days before the conclusion of the CA primary,” said Clinton. “I want to thank your governor, Jerry Brown, for his endorsement.”

Clinton repeated throughout the speech that she believes “America’s best years are ahead of us.”

Clinton voiced her support of renewable energy, raising the minimum wage, the Affordable Care Act and the ending of mass incarceration, especially for nonviolent offenses.

"I applaud what California is doing, raising the minimum wage … I want to do that nationally." – @HillaryClinton #HillaryInSac

Clinton said that in her history on the United States Senate, she often reached across the aisle to work with Republicans on legislation.

Clinton concluded her speech by encouraging her supporters to get out and vote in the California primary on Tuesday, June 7.

“I want to finish strong here in California,” said Clinton. “It means the world to me.”

"I want to finish strong here in California – it means the world to me." – @HillaryClinton #HillaryinSac