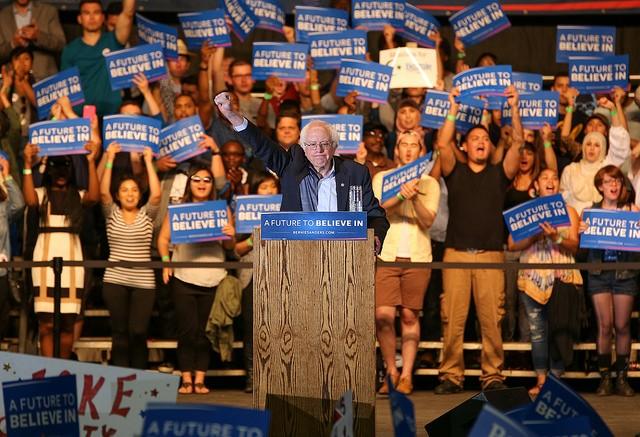 U.S. Presidential candidate Bernie Sanders addresses a crowd of supporters gathered at Booney Field at Cal Expo in Sacramento on Monday. Sanders outlined some of his key strategies to the nearly 15,000 people on hand for the rally. (Photo by Kyle Elsasser)

In a speech to a crowd of roughly 15,000 people, Democratic presidential candidate Bernie Sanders delivered his vision for the U.S. to a receptive and uproarious crowd at his campaign stop in Sacramento Monday.

The campaign stopped in the state capital ahead of the June 7 democratic presidential primary and held a rally at Bonney Field, home of the Sacramento Republic Football Club and part of the Cal Expo fairgrounds.

Sanders introduced his most well-known issues, such as universal health care, income inequality and campaign finance corruption before briefly speaking on his more niche interests, like the “destabilization of the Middle East” and his opposition to the war in Iraq.

Sanders first spoke about the funding of his campaign, which is almost entirely paid for by individual contributions.

“Our current campaign finance system is corrupt and it is undermining our democracy,” said Sanders. “Democracy is one person, one vote. It is not about Wall Street and their Super PACs buying elections.”

Sanders said his was a campaign “of the people, by the people, and for the people,” and he condemned his competitor Hillary Clinton’s paid speech appearances.

Sanders also spoke on global warming and the energy crisis, calling humans the “custodians of the planet.”

“(I wrote) the most comprehensive climate change legislation in the history of the Senate. … Together, we are going to transform our energy system.”

Sanders spoke on income inequality, one of his most popular issues, for over 10 minutes.

“The truth is that we have a rigged economy,” Sanders said. “Today in America … We have more income and wealth inequality than any other country on earth.

“Today in America, the top one tenth of one percent own almost as much as wealth as the bottom ninety percent.”

“(The Waltons’s) workers are often forced to go on food stamps and Medicaid. … How crazy is it that the middle class has to subsidize the wages of the wealthiest family in America?

“We are going to tell corporate America and the billionaire class that they cannot have it all.”

Sanders then addressed another one of his campaign’s key issues – free education and student debt.

“Think for a moment, why should we be punishing millions of Americans for doing the right thing by getting the education they need? We should not be punishing people for getting an education, we should be rewarding them,” Sanders said.

Sanders said that because of changes to the world, the economy and education, American culture needs to shift to accommodate new educational funding. Due to the widespread belief that the bachelor’s degree is the new high school diploma, Sanders said universities should be included with primary education.

“When we talk about public education today, it’s not good enough to talk about first grade through twelfth grade. We need to make public colleges and universities free. … It exists in Germany, in Scandinavia and fifty years ago, believe it or not, it existed here in the state of California.”

“If we make public college free, we are saying to every child in this country, if you study hard, if you take school seriously, regardless of income, you will be able to get a college education.”

Sanders said that imposing a tax on Wall Street speculation, meaning a small tax on every bond and stock sold in the U.S., would “more than pay for free tuition at public colleges and universities, and lower student debt substantially.”

Sanders assured the crowd that his campaign stands with minorities in Sacramento and the U.S.

“How does it happen that we have millions of dollars to spend on a war in Iraq that shouldn’t have happened, while inner cities are crumbling?

Sanders also said the campaign “is listening to our brothers and sisters in the Native American community.”

“We owe the Native American people a great debt of gratitude that can never be repaid,” said Sanders.

“They have taught us one of the most valuable lessons they can teach … That as human beings we are part of nature. That we have to coexist with nature … If we destroy nature we are destroying the human species.”

Sanders then switched gears to speak on universal health care, an issue which brought representatives from the California Nurses Association and the National Nurses United to the rally.

“Let me say something I have been criticized for many times. … I’ll say it again… in my heart of hearts I believe healthcare is a right of all people,” said Sanders, causing the crowd to erupt into a chant of “feel the Bern.”

Sanders said that California has a unique opportunity ahead because of the California Drug Price Relief Initiative, a ballot measure that, if passed, would lower the cost of prescription drugs.

“We are being ripped off by the pharmaceutical industry,” said Sanders, who said the top three drug companies in America made $45 billion in profits last year.

Sanders said California can play a profound role in telling the drug companies they cannot continue to overcharge.

Sanders also tackled speaking about his opponents, focusing on the candidacy of Donald Trump.

“Our strength is in our diversity.”

Sanders said Americans are at their best when they support each other instead of tearing each other down.

Sanders went on to speak about workers’ rights, a key issue in his campaign because of his work with unions.

“100 years ago when workers had no rights … Workers stood together and said ‘enough is enough. We are going to have dignity on the job, we are going to form trade unions.’”

Sanders said that to earn rights in the U.S., minority groups fought hard, and his supporters need to do the same.

“People at the grassroots level struggled… And were beaten and went to jail to fight for a racism-free community. … Women stood up and fought back (to earn voting rights). For decades, against bigotry and incredible hatred, the gay community and their straight allies fought back.

“Brothers and sisters, that is how change takes place. Change takes place when people look around and say ‘you know what? The status quo in this country is not working.’”

Sanders asked why the U.S. is the only country to not guarantee health care and paid parental leave, and asked why we have more people in jail than any other country on earth.

Sanders stressed that the California primary is “incredibly important” to the campaign, and said that with a high voter turnout, he could “win big.”

Sanders said that a big win in California could provide him the delegates he needs to qualify for the nomination, but that he can’t win without support from the people.

“No president, not Bernie Sanders or anyone else, can do it alone. The only way we transform this country is when real people across America… stand up and fight for a government that represents all of us.”