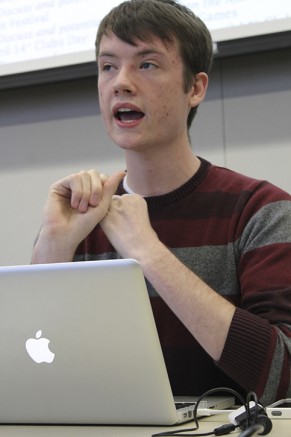 Club and Events Board (CAEB) President Justin Nicholson discusses the Kaleidoscope Games Club Day at the American River College CAEB meeting. The event will be held on April 14. (Photo by Robert Hansen)

The American River College Club and Events Board (CAEB) discussed the April 14 Kaleidoscope Games Club Day and allocated $300 for the ASB Film Festival at its meeting Tuesday.

The Kaleidoscope Games are being planned to be the most game-filled Club Day of the semester, which has not been easy work according to CAEB President Justin Nicholson.

“This is probably the most exhausting Club Day I will put together this semester or this year,” Nicholson said. “The Kaleidoscope Games are going to be pretty intense.”

Some games may be used from the show “Minute to Win It”, created by ARC alumni Guy Fieri.

“We will have a lot of those,” Nicholson said. “We’re still deciding on which ones we want to have. Like cookie on the face we really want to have.”

“How about the standard old stuff like bean bag toss and pin the tail on the beaver,” Dillion said. “It sounds silly but it’s just good fun.”

A water balloon dodgeball game may be in the works as well.

“It would just be the cleaning up of the plastic that we would be responsible for,” Nicholson said.

CAEB director of finance James Cortright volunteered to pick up the plastic if the game is played.

$300 was allocated for the ASB short-film festival, which is currently scheduled for April 22 from 1 p.m. to 4 p.m. in community rooms one and two, with prizes for the top films.

Submissions are due by April 15. There have been no short films submitted as of press time.

Although the consent action passed, not all were in favor of spending $300 on the film festival.

Colton Hobbs, representative of the Physics/Astronomy Club, voted against the spending for the ASB Film Festival. “We don’t need it,” Hobbs said. “What are they going to need $300 for?”

Confidence is the key to success for ARC’s softball team