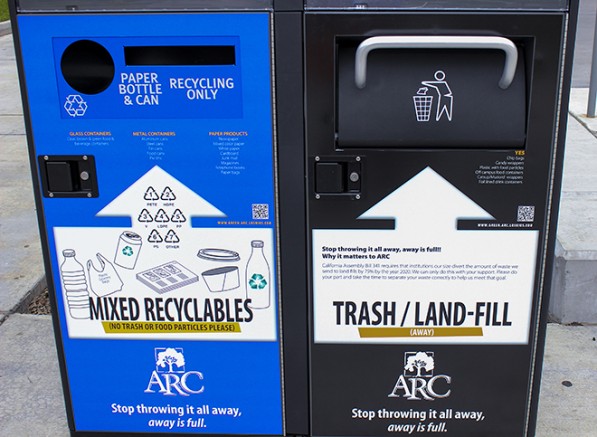 “We have a law we are trying to meet … the only way to do that is if we have recycle bins out on campus,” said Reid.

Matthew Blevis, operations technician of administrative services, said that ARC has to do a Waste Management Annual Report to the State Agency Reporting Center (SARC).

Reid gave a presentation to ASB and with matching funds from the Vice President of the Administration Ray Di Giulio, he was awarded $50,000.

The information in the presentation is available on the ‘Sustainability at ARC’ Facebook page.

According to Reid, the company Max-R, which donated the first 3-unit bin for the cafeteria, worked the pricing to help ARC get the best deal.

“I think the key here is to have something that makes you notice at first off…I think those are nice enough and bright enough,” said Reid.

The Max-R bins are made from 1,145 plastic milk jars and the Big Belly bins are solar powered trash compactors, which send an email to the maintenance department when full.

Jake Parker, who is pursuing a 3D Animation certificate, said that he found the new recycle bins “aesthetically pleasing” and that they make it easier to recycle because they are next to each other when you have different types of garbage.

“They cleared up the campus, especially the ones close to the new building,” said Parker.

“If we are producing less landfill (waste), we are saving money,” said Blevis.

According to Blevis, students are the main source of campus-produced waste, and if they learn to recycle at ARC, they will bring it home and help the environment all over the world.

A can-puncture station to divert aerosol cans from the waste stream and a silver recovery system for the photography department were also purchased with the awarded money.

The can-puncture machine is used to puncture aerosol cans to recycle them because the paint inside is hazardous, meaning it is potentially harmful to health and environment and cannot be recycled.

“Now we are collecting the cans instead of getting rid of them as hazardous waste… then we puncture them, get the hazardous waste, and then recycle the cans,” said Blevis.

Blevis said that by using the silver recovery system, the photography department will be able to separate silver, recycle it, and then the liquid waste, which is not hazardous anymore, can go down the drain.

Reid said more new projects are coming up during 2016.

1 Comment on "Sustainability at ARC receives $50,000 for recycle bin installations."