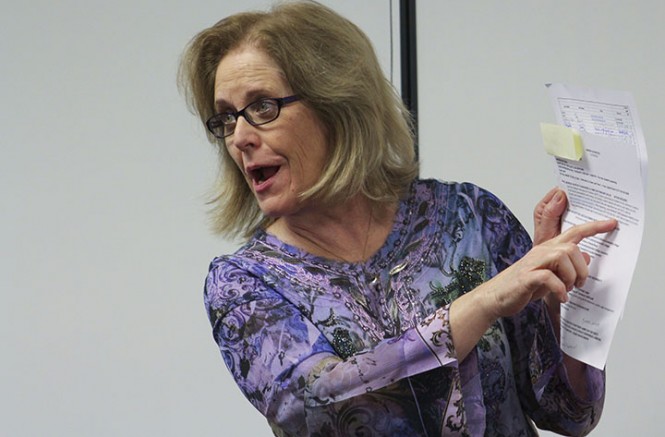 Life is Worth the Walk faculty adviser Peg Scott addresses club members at the first club meeting of the semester. The club will be taking legislature on mental health issues at schools to the California Capitol. (Photo by Timon Barkley)

American River College’s Life is Worth The Walk Club is taking the fight for increased mental health services on community college campuses to the California Capitol.

The club, which brings mental health resources to ARC’s campus, met Thursday to discuss its trip to the Faculty Association of California Community Colleges (FACCC) Advocacy and Policy Conference on Feb. 28 and 29.

“With CSUs and UCs, when they open mental health centers, students complete classes more, they persist, and the complete degrees and certificates at a higher rate,” said Peg Scott, the club’s faculty adviser.

The campus health center can provide mental health assessments but cannot help with treatment, instead giving students referrals to outside providers, which they may not be able to afford.

The proposed legislation, which is being penned by California State Assembly member Kevin McCarty, would create more funding for mental health services in higher education.

Proposition 98, which was passed in 1988, changed the California Constitution to establish minimum funding for California schools, through high school and community college.

“Prop 98 funding has been focused on K-12, and we don’t get included in CSU and UC funding,” Scott said.

Cindy Marks, the club’s vice president, agreed with Scott and said that the gap between high schools and universities was too large.

“The whole reason we started the club is to help students,” Marks said. “There’s a hole between high school and university students.”

When McCarty’s bill is released, members of the Life is Worth the Walk Club will lobby at the FACCC conference for its passing in the state assembly.

Any changes made could take time, so the club is trying its best to provide for the students who need help.

“We have tremendous resources, probably 16 pages worth, and we’re always getting new stuff,” Scott said.

The club will take part in Thursday’s Club Day, with a spread of resources for students to take and a mailing list that sends out updated news and resources.

“Mental health is very close and dear to my heart,” said speech pathology student Bess Wiederhold, who lost her husband to suicide in 2011. “I want to help.”

Marks was concerned about both the availability of and the publicity given to ARC’s current mental health services.

“If I can’t find health services, how will someone in a crisis?” Marks said.