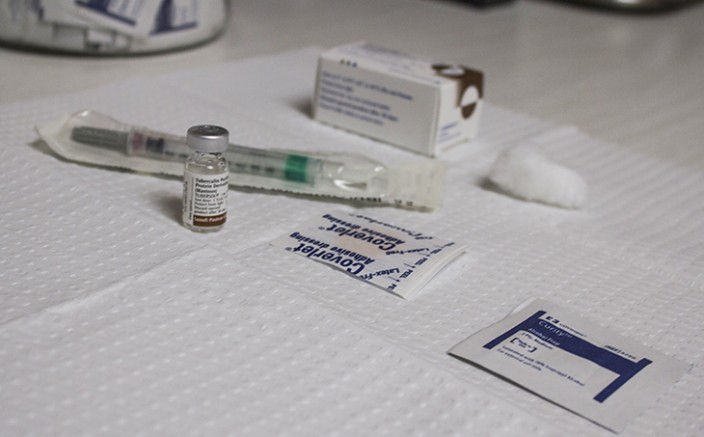 These materials are used in tuberculosis tests provided by the ARC Health Center following the warning from Sacramento County Public Health department that as many as 160 students and faculty may have been exposed to the disease. No active cases were found, but five students tested positive for exposure to the disease. (Photo by John Ferrannini)

Five American River College students have tested positive for exposure to tuberculosis, following the announcement last month that a student was in isolation after having been diagnosed with active tuberculosis, according to a press release from the Sacramento County Division of Public Health sent out Monday.

Laura McCasland, a spokesperson for the public health department, was clear to point out that people who have been exposed to tuberculosis but who don’t have an active case are not infectious.

“There’s a difference between latent TB and active TB. Someone who has been exposed but it hasn’t become active have latent TB,” McCasland said. “You don’t have the symptoms, whereas with active TB you have symptoms. You’re not infectious. That’s it in a nutshell.”

Those who tested positive are being asked to take medicine once a week for 12 weeks to ensure that the exposure doesn’t develop into active tuberculosis, according to the press release.

Most people who are exposed to tuberculosis do not develop a case of active tuberculosis, according to the Centers for Disease Control.

In total, 48 students and staff participated in tuberculosis tests at the ARC Health Center. There will be a second test in 8-10 weeks for those who tested negative.

“We’re very pleased that there are no active results,” said Crow, who encouraged students to get tested. “It’s a very simple process. They can check with your health care provider or with the Health Center.”

Symptoms of tuberculosis include a cough that lasts longer than three weeks, coughing up blood or mucus and chest pain.

The Current will update this story as information becomes available.