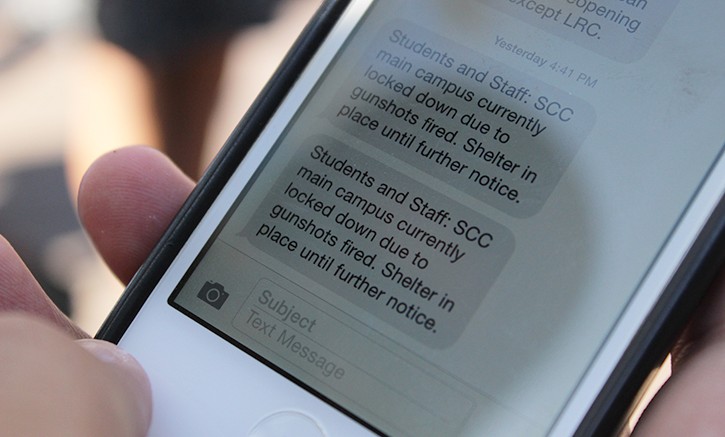 A Sacramento City College student's phone shows a time-stamped message from the district's emergency message system, run by WARN Command, coming 40 minutes after the fatal shooting that occurred on campus began on Sept. 3. The district is considering new options for which company to use for the ALERT system. (Photo by Barbara Harvey)

The Los Rios Community College District is considering a different system to alert people of campus emergencies, according to district spokesperson Mitchel Benson.

This comes on the heels of several efforts that American River College has taken to improve the school’s ability to respond to safety concerns, including a test of the Los Rios ALERT system and the creation of a team of faculty and staff to assess which students may present a safety issue.

The current ALERT system is designed to let students know about crimes or emergencies on campus via text message and email. It is run by the Tennessee-based company WARN Command.

Students and faculty at Sacramento City College expressed outrage that it took 45 minutes for them to be alerted of the on-campus shooting on Sept. 3 that left one student dead.

After a meeting of the district’s preparedness assessment team on Nov. 4 to review the external report on the SCC shooting, the district is sending requests to several companies to propose new warning systems.

“It’s an opportunity to see what technology is out there today,” Benson said. “We’re going to request that companies to let us know what they have to offer.”

Benson said that the district may stay with WARN Command, but that looking at other companies allows the district the opportunity to see how “supplemental systems” can be integrated into the district’s emergency procedures.

“Things discussed include the possibility of a PA system, loud speakers, sirens,” said Benson. “Should we use a supplemental system, there are a lot of issues about how compatible those would be with a basic message.”

The SCC shooting report had proposed the possibilities of “supplemental systems” such as a public address (PA) system and warnings flashing on electronic marquees and campus computers.

Benson said that the district’s tentative schedule is to have the requests for proposals sent to companies by the business office in the coming months, with a decision to be made around April or May.

The summer months would be a time to set up a new emergency alert system, which the district hopes would be operational by Nov. 1, 2016.

Scott Crow, ARC’s public information officer, was in charge of running a test of the ALERT system on campus on Nov. 4.

“All SMS (a type of text message) and email were sent in two to three minutes, but some people may have gotten a staggered response due to their carrier,” said Crow.

Crow said that the data collected from the test allows the school to see how to improve the system in case of an actual emergency.

“You can see if there’s anything you need to troubleshoot,” Crow said. “One of our student help said she didn’t get it, so we looked and she had mistyped her number. That’s something to check.”

ARC President Thomas Greene said that many actions — such as the implementation of the ERNI alert system on some school computers and the active shooter training in the Student Center — were already being planned before the SCC shooting as part of his safe campus initiative.

Greene said that more proposals are in the works, mentioning the possibility of bike cages similar to those at Sacramento State University and an increased use of security cameras.

Greene said the Crisis Prevention and Intervention Team will be designed so that faculty and staff know about students who may present a safety issue.

“(The team is about) creating a larger picture of things happening in more than one place with the same individual and creating that connection to intervene,” said Greene. “Let’s say someone writes something for a paper in a class that really created some concern that the student was safe, or the student was concerned. There’s an opportunity for a faculty member, who might not know the best way, to either approach that student or find help.”

Greene said he hopes to have the team in place “no later” than fall 2016.

Opinion: Vending machines – the convenience you shouldn’t use