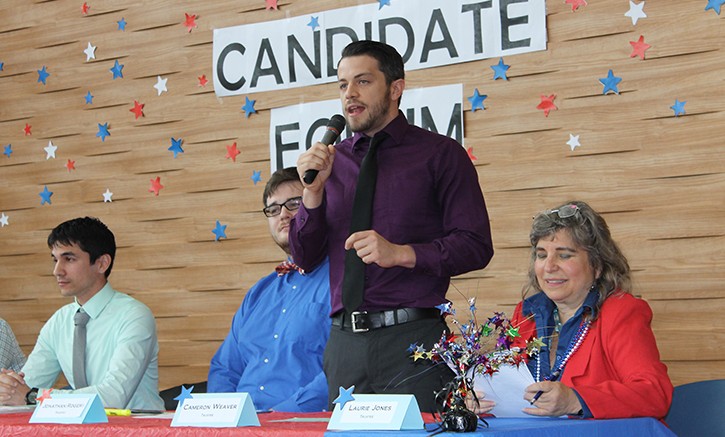 Cameron Weaver speaks at the candidate forums during the student elections of the spring 2015 semester. Weaver, who was elected as Los Rios student trustee, recently cast doubt on the historical account of the Holocaust and said that being a conspiracy theorist is "a title I wear proudly." (File photo)

Weaver has been under fire since a Sept. 16 interview with the Current in which he cast doubt on whether or not the Holocaust took place.

“I’m definitely not going to go out and venture and say anything like ‘Oh, Holocaust didn’t happen.’ There are tons of people that make that argument. From a really unbiased perspective, I completely disagree, but I also completely agree. What I mean when I say both is that I don’t know the answer,” Weaver said during the interview.

Dunning said that she filed the request on Friday.

“I had several students reach out to me and say they wanted Cameron (Weaver) recalled,” said Dunning. “As a member of the Senate, one of my duties is to make sure that the desires of the students are brought to the board.”

Three of the four ASB Student Senates in the Los Rios district must agree to a recall by a three-quarters majority in order for an election to be held.

“Just because it is on the agenda does not automatically mean he will be recalled,” said Dunning. “Students need to reach out to their student leaders and tell them what they want.”

When asked over the past week, several ASB members have expressed varying levels of support for Weaver, including Sen. Laurie Jones, Clubs and Events Board President Justin Nicholson and acting Senate President David Hylton.

CAEB Director of Communications Bruce Rand and former Senate President Garrett Kegel, who resigned his position last week, came out against the comments.