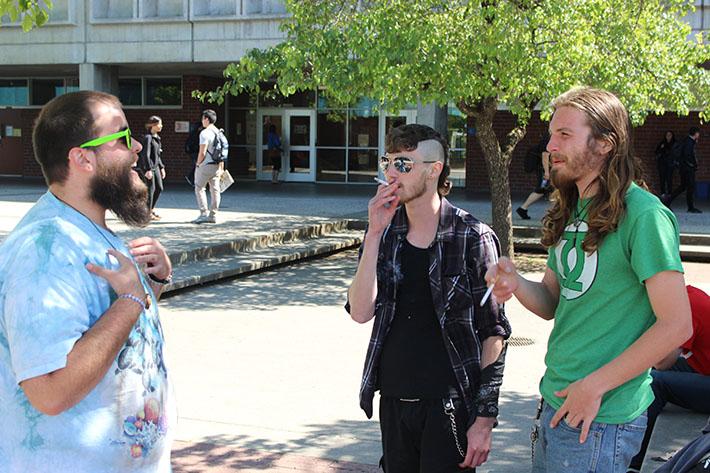 If a new student at American River College does not notice the curly, thin streams of tobacco smoke drifting into the open air in front of Davies Hall or in the Rose Marks quad, they probably notice the crushed cigarette butts that pockmark the hallways.

But after a nine-day online survey of students, faculty and staff ends at midnight tonight, all that might change.

“This has been an issue for years,” said Laurie Jones, who sits on the Building, Grounds and Safety Committee that asked for the survey. “I’m a health oriented person, but it’s also a civil rights issue because there are people who can’t work here because smoke gets in their workplaces.”

After receiving complaints about the prevalence of tobacco use on campus, particularly cigarette smoking, the Buildings, Grounds and Safety Committee provided three possible courses of action for the school: maintaining the current policy, creating designated smoking areas or establishing a tobacco free campus.

A survey, put together by the ARC Research Office, was sent to students, faculty and staff on their Los Rios email accounts on April 6 and will remain open through today. The survey asks which of the three courses of action participants would like to take.

Ashley Rose, a nonsmoking theater major, says she would be in favor of designated smoking areas.

“I don’t like smoking,” she said. “I have a very sensitive sense of smell, so I have to hold my breath sometimes.”

Briana Garcia, a psychology and funeral services major and a smoker, agreed.

“That way other people can walk around us,” said Garcia.

Garcia received the survey in her email, but did not complete it.

“The people who are going to take the survey are the non-smokers,” said Garcia. “The smokers don’t think it’s going to change.”

As described in the 2014-2015 catalog, ARC’s current policy is to prohibit smoking both indoors and within 30 feet of building entrances. The policy is to be “enforced through common courtesy.”

ARC President Thomas Greene said that after the survey is over, a decision will be made about how the school’s smoking policy should change, if at all.

“My executive staff and I are going to review the survey results and examine some other information,” said Greene. “There’s a host of other data out there about the trajectory of tobacco use on community college campuses.”

Added Greene: “If we make any changes about how we regulate tobacco use on campus, the decision will be made in this room,” referring to his office.

Greene said that he does not know when that final decision will be made.

“The hope would be to have any information by the end of the semester, but we will let the process of investigation and assessment control the decision,” said Greene.

Sacramento City College, Cosumnes River College and Folsom Lake College all have designated smoking areas while Sierra College, which is not part of the Los Rios district, has a tobacco free campus.

Sue Michaels, the manager of marketing and public relations for Sierra College, said that she was on the committee that banned smoking at Sierra in 2010.

“There were butts everywhere,” said Michaels. “Now, you don’t see people walking around smoking anymore. I’ve seen a couple of people smoking in their cars. Smoking employees walk outside of campus to a nearby road to take their break.”

“The main reason I came here was because there was no smoking policy like at Sierra,” said Palomo. “You have to go to the parking lot to smoke there. Here, I don’t smoke where it says ‘no smoking.’”

Claire Doughty has been a student at Sacramento City College since before the designated smoking areas were set up in the Fall 2014 semester.

“It was always uncomfortable for me to exit buildings and walk into a giant cloud of smoke,” said Doughty. “Sometimes people would do it next to doors and air vents as well so it would smell inside.”

Doughty said that she thinks the designated areas have had a positive effect.

She said the new policy “helps to keep the smell and harmful smoke away from people who do not want to inhale it.”

Nevertheless, she added that not everyone follows the new rules.

“I still see people smoking outside of the areas, but most people are not confrontational enough to call them out for it, so it continues,” she said.

ARC Public Relations Officer Scott Crow said that the survey is a way to collect hard data on the issue, rather than just anecdotal attitudes.

“This is a conversation that has been going on at the college for some time. There was a survey done a couple of years ago and there have been various movements by students,” said Crow. “There was an interest in gathering sound data through a solid survey.”

Randall Sly of the Buildings, Grounds and Safety Committee said that he thinks the issue has not been properly thought through by members of the committee because of the absence of hard data before the survey.

“There hasn’t been enough student input about this,” said Sly. “They haven’t thought this through. Are all 155 acres of this campus supposed to be smoke free?”

Jones said she disagreed with how the survey was written, but said that a scientific survey was an important first step.

“The next step is to have a tobacco free campus,” said Jones. “Smokers say their rights are being infringed, but then again, I’m not addicted to tobacco.”

Opinion: Bus pass measure not perfect, but the best choice