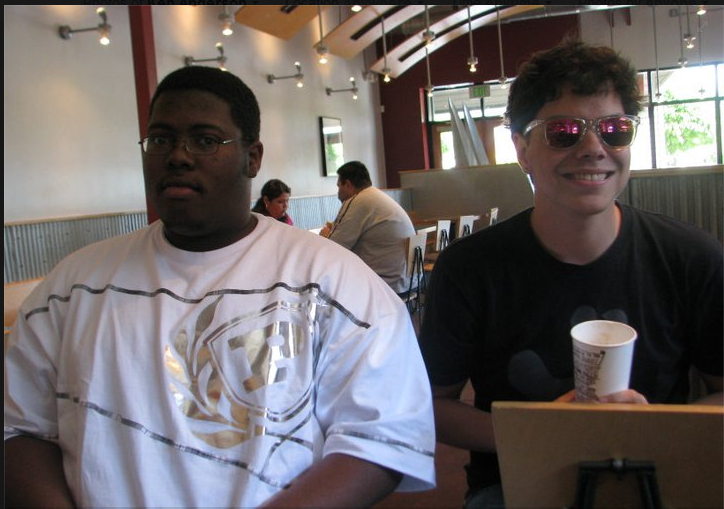 Subway rape suspect Kenneth Chandler Anderson, left, sits with high school friend and ARC student Daniel Romandia, right, at a Chipotle in May of 2011. Romandia said he was surprised after receiving a text from a mutual friend telling him about Anderson's arrest. (Photo courtesy of Daniel Romandia)

Kenneth Chandler Anderson, the man arrested in the Subway shop sexual attack, wrote on his Tumblr page about how scared and angry he was by the incident that occurred at his workplace Tuesday, a crime detectives believe Anderson committed.

On Anderson’s Tumblr page he described how “mind-boggled” he is by what happened at his workplace and describes the condition of the store when he returned to work later in the week.

“Theres blood literally all over the store from it, I even had to clean some up that the cleaning crew missed,” read his post from yesterday.

Sgt. Lisa Bowman, spokesperson for the Sacramento County Sheriff’s Department, said officials are comparing DNA samples taken from Anderson and samples collected in the Interstate 80 rapes that took place in the last several months. Anderson bears a strong resemblance to the sketches of the I-80 serial rapist.

He wrote on Tumblr about a conversations he had with a 16-year-old co-worker in which he asked her what sorts of weapons and defense training she had in case anyone tried to attack her.

He includes in the dialogue between them a time where he asked her if she knows martial arts, carries a Taser, gun, pepper spray, mace or brass knuckles.

The co-worker responds “no” to all his questions, and he encourages her to carry a knife, to which she responds “I don’t think I could stab somebody.”

It is unknown if this was the same co-worker that was attacked on Tuesday.

Anderson also went into detail about what occurred to the victim and the manner in which she was violently attacked.

“My co-worker arrived at work on Tuesday morning like at 6:30am, to open the store and shit  and apparently a dude in a mask fuckin attcked her, like, he fucked her up,” his post continued.

In that same post he also said that police will be looking through security footage, but that it may be difficult to identify the suspect because he knows his boss never puts in tape for the security cameras.

“I thought he was a ticking time bomb,” said Lauren Brock, who frequently talked to Anderson through Tumblr.

Brock said she began following him on Tumblr approximately two years ago and the two had exchanged numbers just four or five months ago and that most recently Anderson began contacting her “a lot more.”

While the two have never physically met, Brock said Anderson was a “nice guy,” but that he had a “rough upbringing.”

He was “funny, outgoing, sweet, but troubled,” she said.

Anderson never told her about about the sexual attack on Tuesday, but she said “He made a lot of posts that showed aggression over the 2 years I’ve been following him, but they weren’t frequent.”

Anderson, seemingly frustrated with the serial rapist attacks in the last few months, often posted about the incidents.

He said on his Tumblr post, “There have been 3 other rapes/sexual assaults in that area over the past  year, each one more violent than the next, and nobody has caught him.”

Anderson enrolled at American River College in the fall semester of 2009 to study psychology after graduating from Mira Loma High School.

“(Anderson) was the kind of guy that everybody knew as a friend and (he) didn’t have any real enemies,” said Tyler Miars, a former classmate of Anderson’s. “When I saw the news article with his face, my first reaction was just total shock.”

Miars, a business student at Sacramento City College, said that he remembers Anderson as being a “very outgoing guy,” and “never would have expected him to be accused of what he was arrested for.”

“I guess it just goes to show that you don’t really know someone as much as you think you do,” said Miars.

Anderson appeared to enjoy sports, and Miars said he always played basketball during lunch and played lineman for the Mira Loma football team.

Another classmate and friend Daniel Romandia told the Current that he was surprised after receiving a text from a mutual friend telling him about Anderson’s arrest.

Romandia, an ARC student majoring in journalism, said Anderson had come from a broken family and was sometimes teased in high school.

“He grew up without a dad, he was made fun of a lot because of his weight, he had asthma. I mean, stuff like that. Just little things that by now are kind of very common.”

Both Romandia and Miars say they don’t remember Anderson having a lot of girlfriends throughout his high school years, but always “had a lot of girls as friends,” said Miars.

Anderson was never unpopular, but his cocky and conceited attitude did put some people off, according to Romandia.

In Anderson’s post from yesterday, he mentions he wants another job.

“Im such a mess mentally right now,” it reads, “kuz this shit could’ve been prevented and I really want another job kuz this shit is truly over the top.”