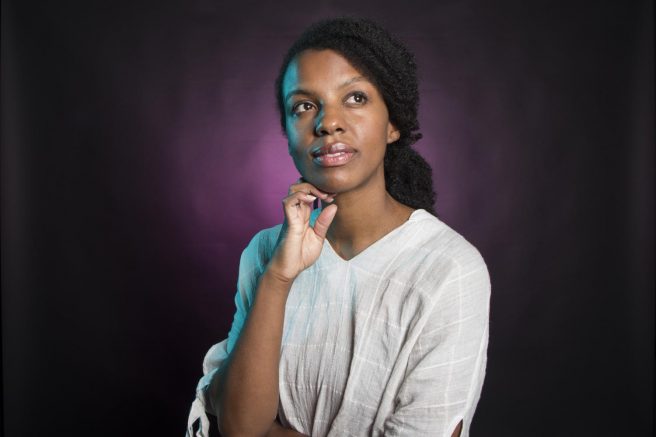 American River College photography professor Jessa Ciel doesn't adhere to one medium of art and lets her passion for social justice guide her in her projects. (Photo by Ashley Hayes-Stone)

Jessa Ciel is an activist and an enigma. A chameleon of an artist across many mediums. The American River College photography professor’s portfolio ranges from a social justice art installation, to directing her own short films and working on the Academy Award-nominated film “Lady Bird.”

Ciel is a filmmaker, photographer and writer, among many other things, passionate about the issues that permeate her community. Across her wide and varied range of projects, the thing that tethers them all together is her focus on the message her art is portraying.

“I like creating something new and I love the challenge of that,” she said. “I don’t even try to make something that is repeatable, or that I can duplicate over and over again to like earn something from, because that’s not that interesting to me.”

As a freelancer, Ciel says she has learned to adapt across many fields and she brings that skill set to her curriculum. She believes the key to making the leap from being a student to being a professional is confidence.

“I really concentrate on the freelance career part of it because I think to be a freelancer is not based on industry in particular,” she said. “There’s so much that translates across different fields. I try to teach my students the skills to be able to market themselves professionally and to run a business.”

Before Ciel taught at ARC, she was a student herself. She received her bachelor’s degree in film from California State University, Los Angeles in 2008, before returning to Sacramento where she decided to take photography classes at ARC in 2014.

“It’s interesting because I took the class that I’m teaching,” she said.

Ciel returned to ARC as a professor in 2018 after receiving her master’s of fine arts degree in photography from the Cranbrook Academy of Art in Michigan, a school recommended to her by one of her professors, Jodie Hooker.

Ciel says that Hooker was also instrumental in her transition from student to professor.

“We needed someone who had run a business and had experience in the current photography market,” Hooker said, recalling Ciel’s work as a student in the program. “She was doing very political and controversial things and her work always had content and it was refreshing.”

Ciel says her work often carries the weight of social justice. One of her more impactful projects was the Beacon video installation, which is currently on display at the Torrance Art Museum in Southern California.

During its original exhibition in 2017, Beacon resided in an empty building on 10th and K street in downtown Sacramento. Each week, videos revolving on a different social theme were projected out of the building’s 18-foot windows.

Ciel, and a friend, Tre Borden, collaborated with over 50 artists from around the world to compile the art for Beacon, which revolved around themes like “consent,” “Black Week” and “Planned Parenthood.”

“We were trying to get people to engage and think about art in a different way, like some of it was really provocative,” Ciel said. “We had a whole week called ‘Black Week’ and only had black artists during that week and all of the photography and video and everything were around those issues.”

Ciel says that she’s an activist first and that it’s important for her art to convey a message about her community and the social injustice she sees.

Ciel’s work often revolves around film. While living in LA she directed three short films. Once back in Sacramento, Ciel had the opportunity to work as a locations assistant for her childhood friend Greta Gerwig on her film “Lady Bird.”

Ciel said that at the time, she and Gerwig never expected the film to gain the attention it did.

This is something Ciel carries into all of her work and the projects she decides to take on, no matter the medium.

Ciel is never bound to one medium, one idea or shacked to concept of making things “pretty.”

Correction: A previous version of this article incorrectly stated that Jessa Ciel graduated from California State University, Los Angeles in 2018. She graduated in 2008.