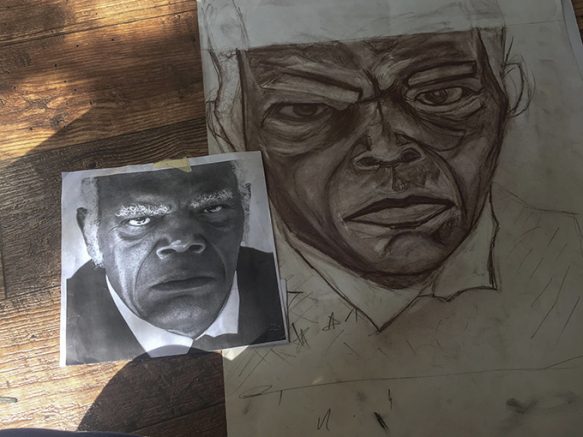 The campus of American River College has become an artistic mecca in Sacramento. The ARC Art Club regularly hosts art exhibitions, performs live art and has its work hung up in galleries all over town.

All of this can be largely attributed to one person: Art Club President Blanca Bastida.

Bastida took over as president in the fall of 2016 and in the span of a semester she has transformed the arts at ARC, injecting a much-needed shot of life into the arm of the arts department, according to those who work with her.

The Shadow Box Gallery is one of the best examples of her efforts; Bastida has made it possible for students to have a permanent spot to showcase their work.

“Art invokes ideas. It makes you feel and gives you a perspective in life. The more people see the more I think we become connected in our humanity.” -Blanca Bastida

Bastida has also arranged events and activities for the art club to participate in all over town as well as on campus.

Events like live art at the Oak Park Brewing Company held every Tuesday (which is currently on hold due to the weather) have not only provided valuable exposure to those involved, but also financial compensation for the starving artists who managed to sell their pieces.

Surprisingly, Bastida doesn’t use any of these opportunities to sell her own work. Instead she focuses on organizing and curating events.

“She is passionate, driven, and absolutely in love with art. She loves hanging shows even more than creating work herself,” Campbell said. “She is tireless in making a name for the art club at ARC and making it a space where students and former students have a continual source of inspiration and support.”

Bastida has quietly established the art club as a force to be reckoned with in the Sacramento artistic community.

“One of [Bastida’s] biggest goals is to create opportunities for artists to get there work out into the community, to get it seen and, with any luck, sold,” Campbell said.

“Blanca is tenacious in her mission to advance the arts … [she is] always on top of things. She always has the club and it’s members in mind when it comes to calls to artists and club days on campus,” Gonzalez said. “She also thinks big by getting information on events the club can do anywhere in Sacramento. Such as the open mic nights we did at the Oak Park Brewery and Second Saturday booths behind Badlands.”

With her efforts, Bastida has created a living, breathing community that lets artists not only express themselves, but also exhibit their work to the community.

“She thinks big by getting information on events the club can do anywhere in Sacramento. Such as the open mic nights we did at the Oak Park Brewery and Second Saturday booths behind Badlands,” Gonzalez said.

While she is an artist herself, Bastida is first and foremost an ambassador of the arts.

“Art invokes ideas. It makes you feel and gives you a perspective in life,” Bastida said. “The more people see the more I think we become connected in our humanity.”

She bridges the gap between the artist and the viewer.

“I want to create a name for ARC,” Bastida said. “I want to push [ARC] students out into the world.”

Be the first to comment on "The heart of the American River art club: Blanca Bastida"