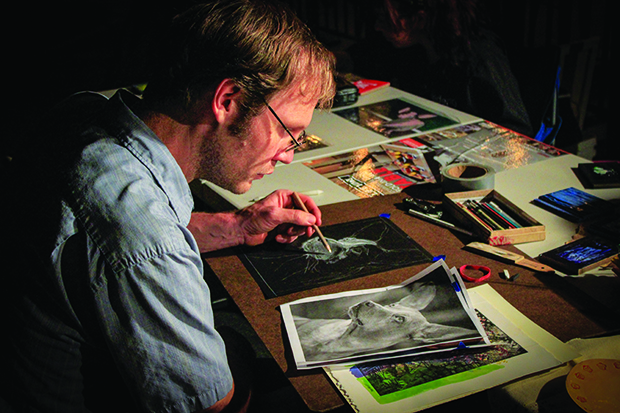 Max Marchol draws a portrait of a dog from a photo at the Oak Park Brewing Company on Sept. 6 in Sacramento, California. (Photo by Hannah Darden)

There is a Renaissance happening in Sacramento. The arts have found a home in what was once considered a cowtown, a cultural graveyard.

This Renaissance is being spearheaded by a group of talented young artists. Artists like American River College’s own Max Marchol.

Marchol has been featured in The Current often in the past. His live art shows and displays have received plenty of coverage but there is something about Marchol that seems to continuously draw the limelight.

Marchol is a mixed media artist whose work has a visual significance that is often unseen at the community college level.

His art is mastered with a patience and attention to detail that makes it look photorealistic.

His subjects are often those closest to him; his wife, April Marchol and his two cats, Pablo and Picasso.

“My wife and cats tend to be a focus oftentimes because they are most accessible to me, and are at least somewhat tolerant of me following them around with a sketchpad or camera,” Marchol said. “I like catching little candid moments of life, and I can do that at home without intruding on a stranger trying to relax at a park, restaurant, or something like that.”

“I like catching little candid moments of life, and I can do that at home without intruding on a stranger trying to relax at a park, restaurant, or something like that.” -Max Marchol

Marchol doesn’t fit the role of the traditional artist. His work isn’t meant to make grandiose statements. Marchol’s work is much more subdued.

“A drawing, painting, photograph, sculpture or any piece of art is a way of seeing through another person’s eyes,” Marchol said.

And that is what Marchol is first and foremost: an observationalist. His work is done on the microscopic level with a fine tooth comb and an eye for the details that seem to go overlooked by everyone else.

Whether it is a drawing or a photograph, Marchol is always chasing a goal with his artwork.

“I try to learn something new with every piece that I make. If that at least happens, I’m satisfied. Lately, I’ve been trying to add more emotional imagery to create more of a visceral impact on the viewer,” Marchol said.

These viscerally inspirations have already begun to take and shape and that has not gone unrecognized by his peers.

Art Club Vice President Erica Campbell said she sees a level of intricacy in Marchol’s work that makes her excited for the artist’s future.

“His work is so intricate that it’s just mind-boggling sometimes … People kept thinking his cat drawings at the [Sacramento Poetry Center] show were photographs,” Campbell said. ”He’s extremely talented. His work already shows a level of excellence that gets talked about. It’s exciting to see what he does next.”

ARC’s Shadow Box art exhibit has been housing the work Marchol for the entirety of the month of March. 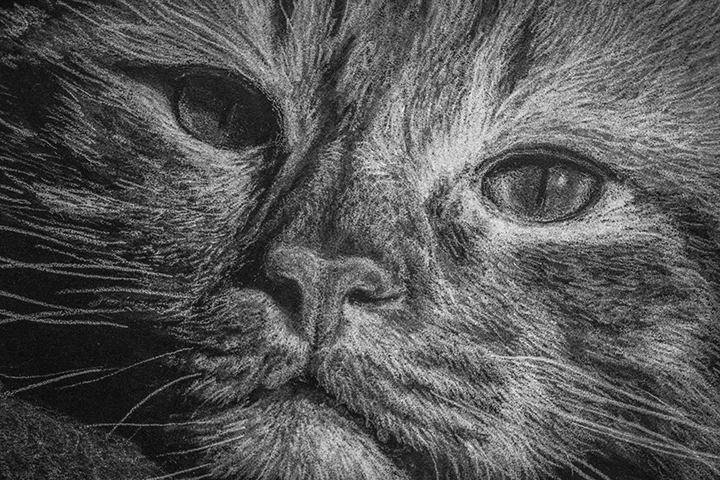 “Pablo” by American River College student Max Marchol was on display at the Sacramento Poetry Center on March 11. (Photo by Luis Gael Jimenez)

His display was put together by Art Club President Blanca Bastida with a love and affection that makes it stand out among all of the other exhibits that have called the Shadow Box home.

Marchol’s mixed media art display has been arranged to look as if it was his own personal studio. A snippet of the artist’s home frozen in time in a tiny window display hidden in a corner of the school.

Bastida said she put together the display with such affection because of her respect for Marchol and his work.

“He does a lot of research beforehand. He dedicates a lot of his time. His work ethic is very impressive,” Bastida said.
Some of Marchol’s work will also be housed in the Shadow Box’s next exhibit; an exhibition of different art students’ work.