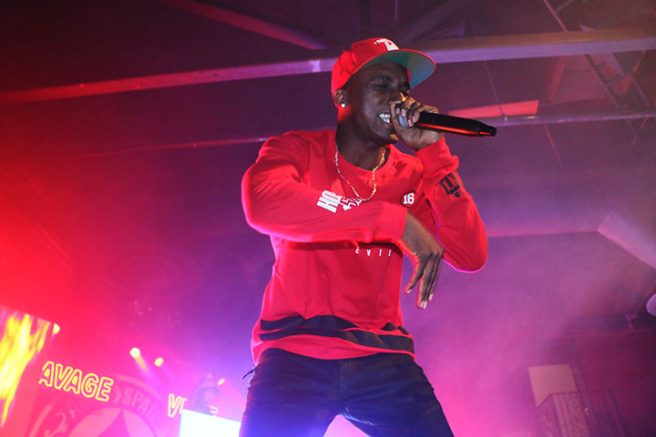 When you look into the eyes of rapper Hopsin, it’s hard to look away.

The artist has a certain je ne sais quoi quality about him. That, and a pair of shock-white contacts make him look more akin to what a goth kid thinks a rapper should look like.

The contacts, the music and the hyper-aggressive lyrics that focus on the problems of today’s world: these are the things that make Hopsin an outlier in the modern rap game.

An outlier, who has amassed more than 12 million followers on social media and nearly 400 million views on YouTube.

Rapper Hopsin during a performance in Sacramento, California on Oct. 8 as part of his “SavageVille” tour. (Photo by Luis Gael Jimenez)

It might seem like he has no trouble standing out in a crowd, but that has not always been the case. There was a point when the aspiring artist was struggling to find himself an audience on MySpace.

This was before the contacts, before the record deal, before the feud with Soulja Boy. Back when he was just a teenager, trying to catch his big break on a website full of people trying to do the exact same thing.

And while his attempts at fame were lost in the sea of top friends and custom profiles that was MySpace, somebody at Ruthless Records (the record company founded by rap legend Eazy-E) saw the potential in Hopsin.

The only problem: Hopsin joined the company about ten years too late. Eazy-E died of complications due to HIV/AIDS in 1995. The company was being run by E’s widow, Tomica Wright.

Fans of Hopsin’s music will recognize Wright’s name, as Hopsin has never been shy to mention the details of their work relationship.

Hopsin and Ruthless were unable to see eye-to-eye on the direction of his career. The split was less than amicable. 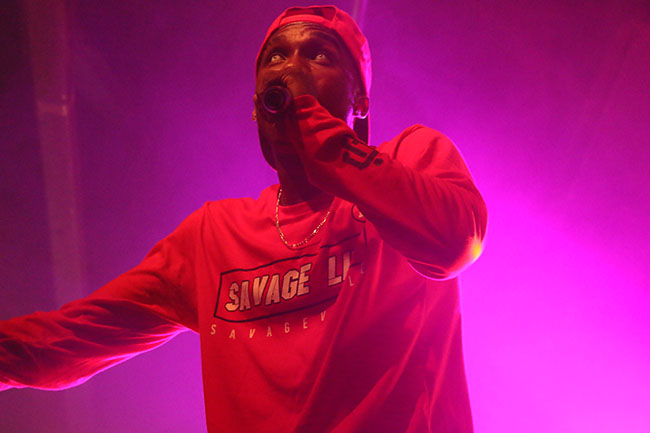 It was around the same time that the artist was able to get his first major hit, “Sag my Pants,” a song that has become an anthem for his fans across the world.

Hopsin had no idea what he had on his hands at the time. He said that he thought the song “would be a little booster for my career. I had no idea how much it was going to take off.”

Nowadays, Hopsin uses the song as an opportunity to share the spotlight with some of his more die-hard fans.

During his show at Ace of Spades in downtown Sacramento, he called up three random fans from the crowd and handed the microphone to them, giving them each the chance to rap a verse. The place nearly erupted when he began selecting audience members. It seemed like every hand in the venue was raised high into the air as bodies began rushing the stage. 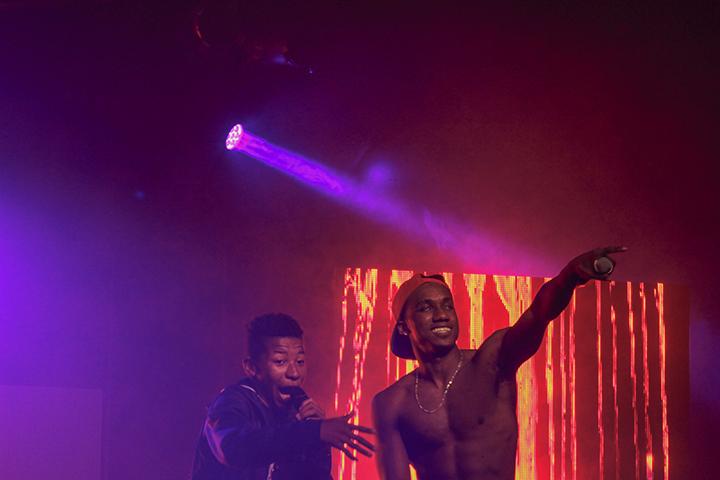 Rapper Hopsin let his fans rap his last song of the night, “Sag my Pants” in Sacramento, California on Oct. 8. (Photo by Luis Gael Jimenez)

This was the same venue where Hopsin dove unexpectedly into the crowd and had to surf an ocean of fans to get away from the security guards, who had no idea what was going on.

This is the kind of energy that he brings to every show. Hopsin is the Iggy Pop of rap music, an unbridled madman with a microphone. 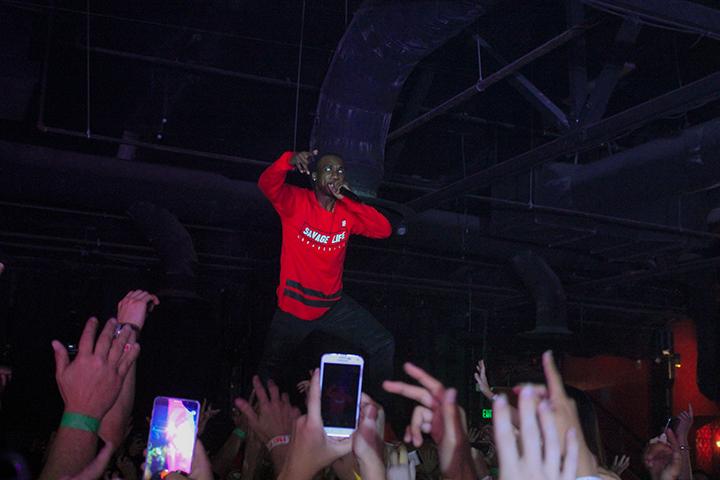 Rapper Hopsin performs while crowd surfing at Ace of Spades in Sacramento, California on Oct. 8 as part of his “SavageVille” tour. (Photo by Luis Gael Jimenez)

This madman, however, has built up a shrewd business acumen over the course of his exceptionally controversial career.

After burning the bridge with Ruthless Records, he started his own label, Funk Volume, which has recently received a nice bridge fire of its own. Hopsin is unfazed.

He has now started his own label for the second time, Undercover Prodigy.

Since his new label was born in early 2016, he has yet to sign any new artists, but when he does don’t expect a Hopsin junior. 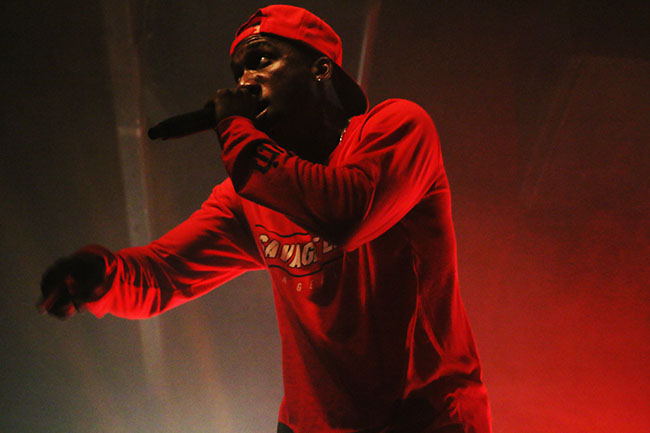 “People have already seen Hopsin… you got one you don’t need another one,” he said. “I just want someone completely different. It could be a freaking singer it could be anything…  I don’t want someone putting crazy contacts in their eyes.”

The rapper’s controversial image can largely be attested to the progression of his series the “Ill Mind of Hopsin” in which he delves further into social and personal issues.

It can be argued that a lot of rappers pose controversy in their music but Hopsin takes it to a whole other level.

In it he talks about the problems he sees in society with modern rap music and whatever else seems to be bothering him at the moment.

“I used to claim that hip hop was dead when I was first coming out, it is completely dead now. I have a song called “No Words” because they’re not even saying words anymore.”

Hopsin has never been one to mince words, and a lot of his work serves as a cathartic process to express his emotions. 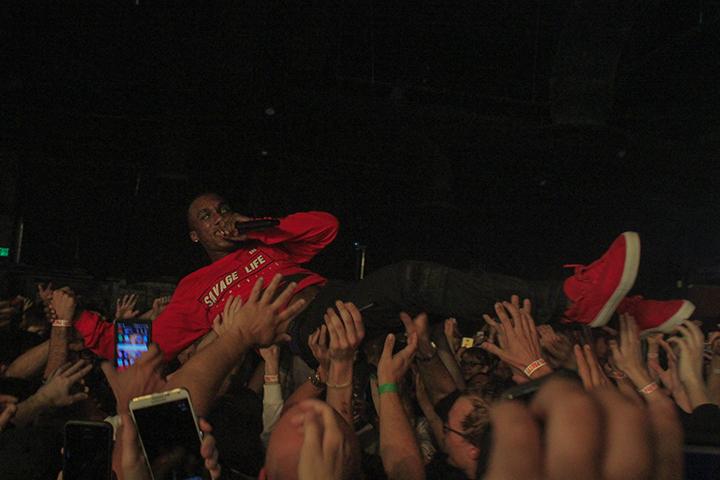 Rapper Hopsin performs while crowd surfing at Ace of Spades in Sacramento, California on Oct. 8 as part of his “SavageVille” tour. (Photo by Luis Gael Jimenez)

He said “When I’m mad I’m really mad. I’m the type when I’m (angry) I go in my room and I’m like talking to myself, I’m looking in the mirror, I’m acting out scenarios.”

A lot of these scenarios end up becoming part of the “Ill Mind of Hopsin,” a series that has created a controversial image for him – an image that has allowed the artist to express his unorthodox views on social and private matters.

Tracks like “Ill Mind of Hopsin 7” have even gotten the rapper in trouble with his own family after he renounced God and Christianity.

“Now I’m dealing with this backlash because Marcus (Hopsin) isn’t a Christian. And I’ve been told that my sinful life is an addiction.”

The rapper has never had trouble expressing his point of view, with the exception of “Ill Mind of Hopsin 9”.

“There’s somebody right now who deserves ‘Ill Mind 9’. I don’t think I’m going to do it because this one will be the worst one. I know the fans will love it but I don’t want to live with knowing I did it. There’s definitely someone that deserves it though. They’ve been pushing the ‘Ill Mind’ button.” 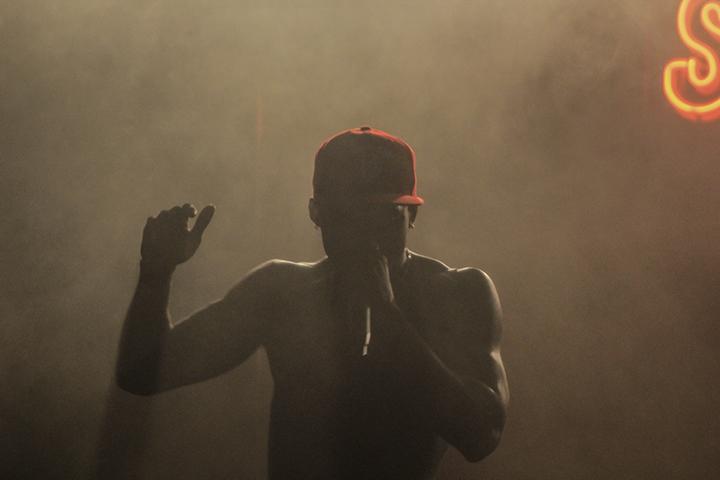 Rapper Hopsin during a performance as part of his “SavageVille” tour in Sacramento, California on Oct. 8. (Photo by Luis Gael Jimenez)

Even in the most seemingly aggressive songs, there are positive messages interweaved in Hopsin’s music. Like in “Ill Mind of Hopsin 5”:

“Yo, we need to make a change while there’s still time.

It is hard, and sometimes I struggle trying to reveal mine.

I can guide you if you feel blind.

I just need you to be willing to journey into my Ill Mind.”

“I know there are youngsters who look up to me and I don’t want to be somebody that they look at and get motivated to do something wrong. I try and represent something positive. I know that I can be perceived as a wild guy sometimes but I’m not a reckless person,” Hopsin said.

It seems that Hopsin has grown wiser as his career has progressed. The now 31 year old is thinking about the future, and even retirement.

After he puts the microphone down for the last time, he doesn’t plan on fading away into obscurity.

“In the future I want to speak at schools, but I don’t want to be the guy that walks in and tells kids that the key to success is only 3 steps away. I believe in keeping it real and raw. I want to talk to these kids in a way that makes them realize how hard life can be.”