When he heard the news that iconic musician Prince had died, American River College music professor Dyne Eifertsen could only think of the impact that the ‘Purple Rain’ artist had had on his career as a musician

“I was in middle school, the perfect age, when ‘Purple Rain’ came out,” Eifertsen said. “That album was so iconic for my generation. That’s kind of what got me really inspired to be a musician was that album.”

Eifertsen said that Prince’s work as a musician was something that every generation could get into.

“His musicianship and his vibe – it was just a great vibe that he had. At the time, his band was just great,” Eifertsen said. “He was kind of like Michael Jackson, in that everyone knew one of his tunes whether they were younger or older.”

Eifertsen added that Prince had a distinct influence on his musical style.

“Even as a trombone player, I always loved rock and roll,” Eifertsen said. “What I loved about him was, even though there was all this new wave coming out – Culture Club and all these groups and they were good – I felt like Prince was an equal to all the great Jazz artists like Miles Davis in his creativity and his artistry. I saw him and was like ‘I want to be that. I want to be like him.’ ” 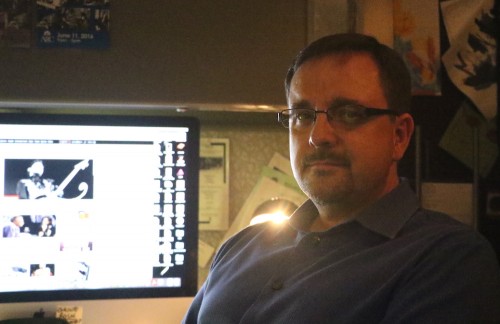 American River College music professor Dyne Eifertsen sits at his desk on April 21, 2016 after reading an article about music icon Prince’s death. Eifertsen said that Prince had a profound effect on his career.

Right as the news was first making its way around, Eifertsen had just started his introduction to his rock and roll history class and broke away from the lesson plan to let his students read and talk about Prince’s death.

“We had already talked about him, because we’d just covered soul music,” Eifertsen said. “I used Prince as somebody who kind of encompassed all of those artists within his being as a musician. The importance of being a showman, of being a great musician, great lyricist, great composer. The whole thing. He was kind of the whole bag. He knew all that from knowing his history.”

Eifertsen said that when the initial shock wore off, the class as a whole were really hit with the realization that “there would be no more.”

“It was tragic,” Eifertsen said. “It was probably similar to how people felt when John Lennon was assassinated. Losing an iconic figure of that wind.”

By being around so many people of different ages at the time he found out about Prince’s death, Eifertsen noted that it was interesting to see how the different generations digested the news.

“Prince was kind of like my generation’s Beatles, so I had quite an investment in him throughout my career so it’s hitting me pretty deep,” Eifertsen said. “I think the younger students here – I had ‘Purple Rain’ and listened to that over and over – but now they’re going to immerse themselves in everything that he did and that’s kind of cool. They’re going to really enjoy him for what he was.”

As a closing remark, Eifertsen said “Prince always went with what his heart told him and I loved that.”