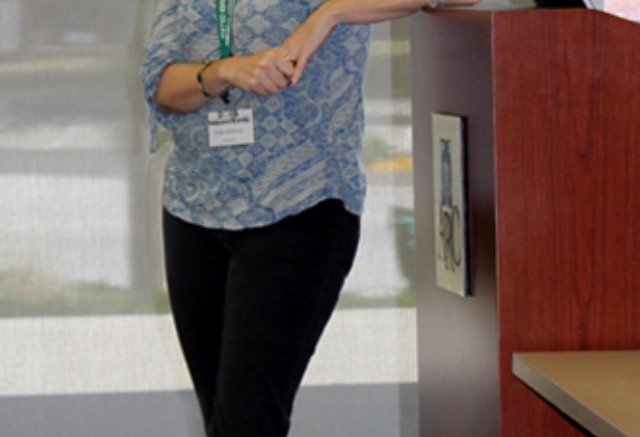 For American River College adjunct professor and writer Erika Mailman, choosing to write her first young adult novel, “Haunted,” was mainly motivated by the story she was struck with one night after having a nightmare.

“Woman of Ill Fame,” published in 2006, was indeed about a Gold Rush era prostitute who enjoyed her line of work, but in writing for a young adult audience, Mailman had to change the tone of her writing, and take herself back to the mental and emotional state of a teenager.

“It’s a time of incredible lows and incredible highs,” said Mailman to the full room of attendees during the author’s SummerWords workshop on writing YA fiction, “Victory and Humiliation: Character Voice in Young Adult Fiction.”

The first exercise Mailman gave was to recall moments of victory and humiliation from the teenage years, and also the circumstances of their first kisses.

Then, everybody was given ten minutes to write a fictional scene based around one of those moments, while incorporating at least three of the five physical senses.

Three attendees shared their finished products, which featured the shame of riding shotgun with mom in an old, beat up car to school, anger at a parent’s alcohol abuse and the wonder of a first romance on a hot summer day at the beach.

After the writing exercise, Mailman ran people through the process of writing a YA novel, and the complications that are a part of the industry.

According to Mailman, characters come first. The most important part of a strong YA novel is a relatable, fleshed-out character.

When it comes to swearing, said Mailman, certain words are automatic triggers to stop a chain store like Target or WalMart from putting your book on their shelves, although YA authors like John Green often break these rules with no consequences because of their large following.

Mailman also shared insight into her next novel, the follow-up to Haunted, which comes out in February, once again under the penname Lynn Carthage.

Explore the culture of Barcelona while getting credits