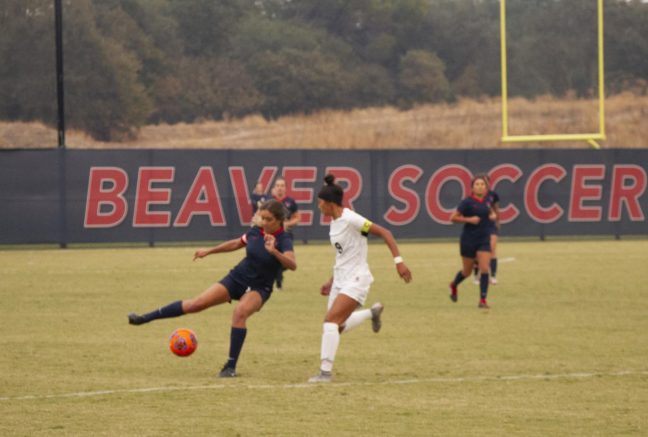 The American River College women’s soccer team won its final game of the season on Nov. 9, with a score of 3-2, in a close match against Santa Rosa College, leaving them with a final season record of 5-13-2.

Head coach Paul Arellanes said that although this season has come with its ups and downs, he is pleased with it how it ended.

“This game went great, all the previous games we haven’t been able to pull through but the kids battled and never gave up It was a great way to finish the year off, ”Arellanes said.

Although ARC got the first touch, Santa Rosa was in control of the ball for much of the first half. SRC pushed the ball towards ARC’s goal and almost scored numerous times, however ARC’s goalie, Josie Gover put forth solid defensive efforts.

Although ARC played strong defense, the team was unable to stop SRC from scoring and within the first four minutes of the game SRC made its first goal.

After consistent back and forth between the teams, ARC was unable to score in the first half and the second half began with a score of 1-0.

The second half of the game had a slow start. Both teams played strong defense and kept a steady flow of the ball.

ARC’s first goal came from a penalty kick after ARC midfielder Tanya Rodriguez was knocked down in the penalty box.

The goal was an accomplishment for Rodriguez who said this last game was important to her.

“Because it was our final game, we all had this mentality to go out hard and strong, and literally play like it was our last game,” Rodriguez said.

ARC almost scored numerous times in the beginning of the first half but was consistently blocked by SRC’s goalie each time.

The back and forth between both teams created an air of tension both on the field and in the audience.

ARC’s second goal came from forward Kai Cooper bringing the score to a tie of 2-2.

ARC was later able to pull ahead when Cooper scored another goal with an assist by forward Hildelice Medina, resulting in a one point lead, 3-2.