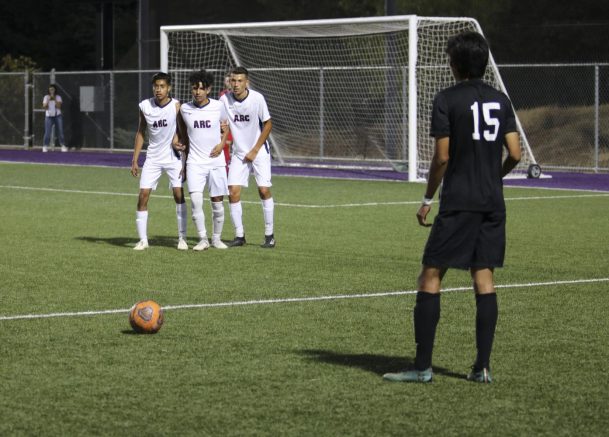 Folsom Lake College defender Eddie Ramirez takes a free kick as (left to right) Pedro Hernandez, Miguel Jurado and Santiago Moreno line up ten yards away to block the shot in the first half. ARC lost to FLC 3-1 on Oct. 4, 2018. (Photo by Gabe Carlos)

ARC center forward Andrew Stoltenberg kicked off the game but quickly lost possession of the ball after a failed trap.

FLC’s offense dominated ARC’s side of the field in the first half. ARC’s goalkeeper Christopher Sampo said he felt frustrated with how his team played the first half.

“The first half sucked,” he said.

Miguel Medina, a midfielder for FLC, scored the first goal of the game in the 12th minute, shortly after a missed shot on FLC’s goal by ARC’s Raunak Manandhar.

ARC player Renzo Bozzalla was yellow carded for being too aggressive in the 25th minute. The free kick allowed FLC’s forward Tanner Boyea to cross into ARC’s penalty box but his teammates were unable to follow through and score.

ARC tied up the game 10 minutes before halftime with a header by Santiago Moreno, who was yellow carded shortly after for blocking a throw-in from FLC with his hand.

FLC’s offense picked up after that, scoring two goals, back to back in the last two minutes of the half, the first by defender Dylan Huft, then less than a minute later by midfielder Erik Mattice.

ARC head coach Paul Hansen said he felt that was where FLC took control of the game.

“We just kind of blew it right before the half,” Hansen said. “Giving up those two goals … We were excited to get the tying goal and then … I don’t know if we just relaxed mentally, but we had the next five minutes where they were all over us.”

While they picked up their offense and tightened their defense in the second half, the Beavers had already lost the mentally game, according to Hansen.

“The game was sort of done then and that was a little unfortunate. If we could have gone into [the half] one, one I think we would have had a chance,” he said.

ARC tried to save the game by playing more aggressively and pushing up it’s defense while FLC tried to take wide shots and lock down their goal.

“We threw some more attacking players into the game but at that point [FLC] could just sit back and play good defence and finish us off. So, it was a little rough,” Hansen said. 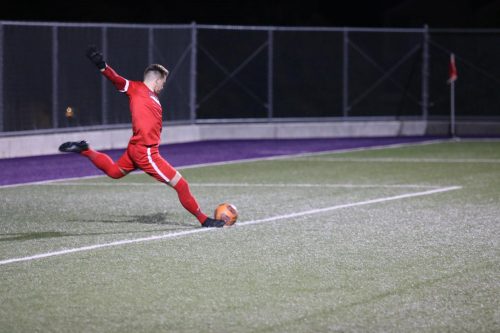 Sampo said he felt he and his team did better in the second half when he blocked a penalty kick by Mattice and then took another shot to the face.

“The second half we picked it up, we began bringing more energy over the 90 minutes,” he said.

But it wasn’t enough as the second half ended with no goals for either team, closing the game at 3-1.

According to Sampo, all ARC can do is move past the loss and train harder.

“In the next practice [we need to focus on] training hard, brushing this off and looking forward to next friday,” he said.

Despite the disappointing match, Hansen said he felt confident going into their next game. “Our next game should be a winnable game for us and the guys are actually excited to actually have a friday home game … so we’re looking forward to it,” he said.

ARC played Modesto at home on Friday, winning the match 3-1.

Be the first to comment on "ARC men’s soccer loses to district rival, 3-1"