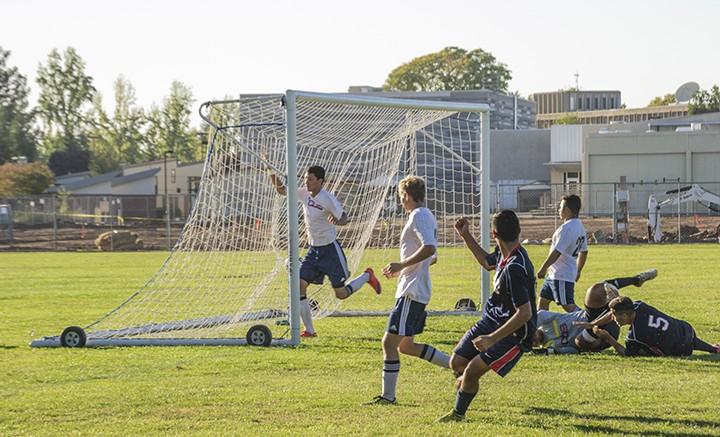 American River College defenseman Noe Romero (5) scores a goal during ARC's 3-0 win over College of the Sequoias on Oct. 9, 2015. The game was played with a heavy heart for Romero as his friend passed away in a car accident before the game. (Photo by Joe Padilla)

By Kevin Sheridan and Joseph Daniels

American River College’s men’s soccer team scored a season high three goals and displayed good ball movement and a deep drive into College of Sequoias territory and won its first game of the season with a 3-0 win over COS.

ARC’s offensive explosion started early in the first half when freshman defenseman Alan Lopez scored his first goal of the season.

“The story of this game is that we’ve been getting opportunities to score and fanning them, and we finally got a day where we converted,” said ARC head coach Paul Hansen.

This goal came on the heels of a potential scoring play for ARC that ended up being kicked out-of-bounds and back into COS possession.

Early in the first half, communication was an issue for ARC as two of its players went for the ball at the same time along the sideline and two others allowed themselves to be split by an advancing COS player.

Hansen attributed this lack of communication to the byproduct of dealing with young players, as ARC has 24 freshman on its roster of 28.

“(Young players) don’t help each other out with information as they play,” said Hansen “It’s been kind of an ongoing issue.”

ARC displayed good ball movement after Lopez’s goal, and another deep drive by ARC led to another goal by defenseman Francisco Lomeli to give ARC a 2-0 lead.

For Romero, the game was played with a heavy heart as his friend and Sacramento State student Jesus Sotto died in a car accident prior to the game.

“This was very personal, scoring for that goal was awesome. He was really on the field with us,” said Romero.

“The feeling after (the game), it felt like he was with me throughout the entire game.”

ARC’s offense slowed down after that goal, as it had several near misses with shots-on-goal after the 3-0 lead.

“We definitely feel a bit more confident now that we scored some goals, because we have been lacking that,” said Romero.

In the second half, a COS player collided with the legs of freshman defenseman Andrew Amos, causing him injury.

Amos was helped off the field by trainers and did not return.

“Nothing too serious hopefully,” said Amos “The only thing (the trainers) are worried about is little bones, possibly a little fracture.”

ARC forward Josue Barrera said that ARC getting its first win of the season “feels good.”

“We definitely feel a bit more confident now that we scored some goals, because we have been lacking that,” said Romero. “I think the next game will be a great game also.”

The win advances ARC’s overall record to 1-9-3 and it will play West Hills College Lemoore at home on Tuesday.

“To be perfectly honest, (COS was) not our toughest opponent of the year either,” said Hansen.