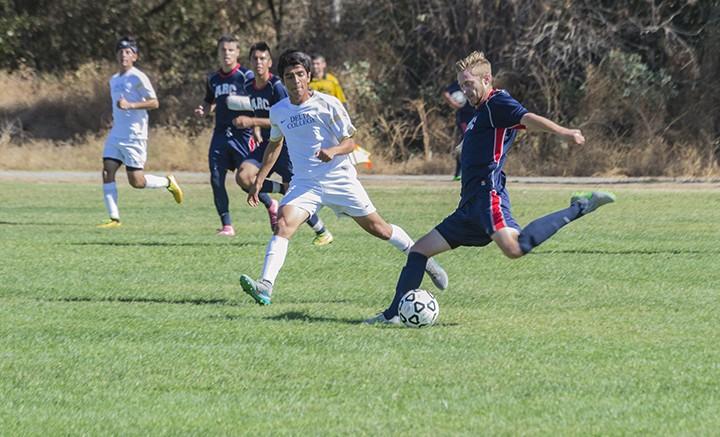 American River College defenseman Andrew Amos prepares to kick the ball down field against Delta College at ARC on Oct. 2, 2015. Both teams played to a 0-0 tie. (photo by Joe Padilla)

American River College men’s soccer team failed to get its first win of the season against San Joaquin Delta College and the game ended in a 0-0 tie in a game where ARC’s defense was tested by SJDC’s offense.

The draw made its overall record 0-8-3, as it has only scored one goal in four games against Big 8 conference teams.

ARC’s defense was immediately put to the test, as SJDC had the ball on offense for the first five minutes to start the game.

“(Rizzo) gave us the fuel we needed for defense,” he said.

Hansen mentioned how Rizzo’s performance of late has enabled him to be used in different lineups, having switched from defense to being an offensive player.

Missed opportunities plagued ARC throughout, as it struggled with its accuracy with free kicks and ball movement.

ARC was aggressive with having five free kicks but centered the location of the ball by only attacking from the right side of the field.

ARC defenseman Ryan Kane said he felt the offense could have performed better when it came to the free kicks.

“The first dipped too much and the other more whipped behind the defense,” said Kane who attempted two of the free kicks.

ARC’s attackers had trouble advancing the ball past SJDC’s defenders, and its lateral passes were ineffective.

Rizzo said his team must improve its mentality heading into ARC’s next game, and stressed to his teammates that they just need to know their roles on the team.

ARC will try for its first win of the season on the road against 5-4-1 Taft College on Oct. 6.