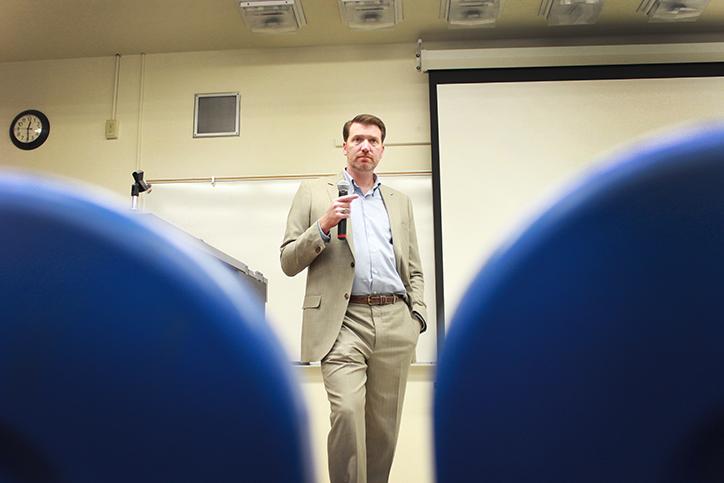 ARC English professor and author of "Let the Water Hold Me Down" Michael Spurgeon discusses the creative process of writing a novel for publication during College Hour in Raef Hall on Oct. 17. (Photo by Emily K. Rabasto)

American River College English Professor Michael Spurgeon spoke about his new novel “Let the Water Hold Me Down” at College Hour on Thursday in 160 Raef Hall. The audience of about 60 students and faculty appeared jovial and engaged.

During his presentation, Spurgeon chronicled his time in San Cristobal de Las Casas, Chiapas, Mexico, where he was living during the Zapatista uprising in Chiapas on Jan. 1, 1994, in which rebel groups of mostly indigenous peoples declared war on the Mexican federal government.

He had gone home to the states for the winter holidays and heard about the uprising over the television. In February, Spurgeon was able to return to Chiapas to his fiancé, a native Mexican of Mayan descent, who had stayed in Mexico during his brief absence.

Spurgeon also read from the novel, and it was apparent to the listener how the author’s personal experiences had influenced the book’s subject matter.

Within the first few pages of “Water,” readers are forced to consider their own concepts of race.

The story’s main character Hank, who eventually travels to Mexico where the majority of the story is set, self-describes as “white,” while his best friend Cesar, good-looking and athletic, comes from a politically prominent family in Mexico with a clearly-defined European heritage. Cesar’s background is important, in part, because it influences how others define and accept him.

“The political hierarchy (in Mexico) is tied to the racial hierarchy, and the indigenous people are definitely at the low end of the power structure,” Spurgeon said. “Ultimately the crux of the book is a question of class warfare, and tied to that is racial warfare.”

The book is laced with themes of identity and race, but those aren’t the only issues Spurgeon addresses in his novel.

“The central message is that we as members of the community have a responsibility to get involved and to do things for the greater good,” said Spurgeon. “To fight injustice when we see it and where we see it.”

The presentation and reading were followed by a short question and answer period in which Spurgeon spoke briefly about the process of writing his novel. “It took me 10 years of practicing writing and thinking about all of those events and what I wanted to do with them,” Spurgeon said. “I wrote the first draft in 2003 and then went through many revisions over the next 10 years to become the book that it is now.”

Be the first to comment on "ARC professor presents new novel"