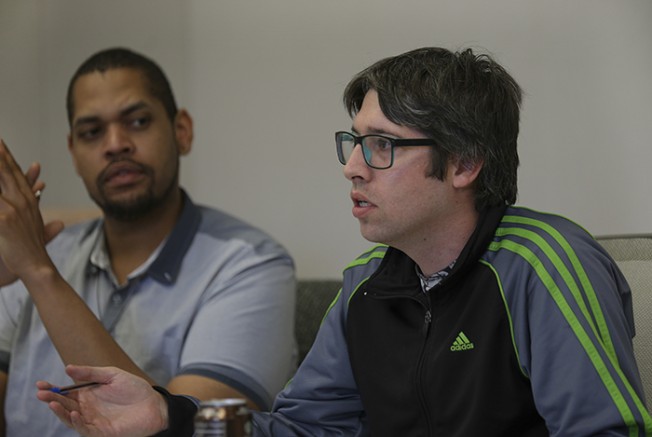 Student Senate President David Hylton II speaks at a Club and Events board meeting with Director of Finance Jeremy Diefenbacher at his side. The two have shown poor leadership skills during their time with the ARC Associated Student Body. (Photo by Kyle Elsasser)

When will our student leaders start acting like actual leaders? As long as Student Senate President David Hylton and Director of Finance Jeremy Diefenbacher remain in office, American River College may never receive an answer to that question.

Within the last week Hylton has openly expressed a desire to bring marijuana to the 2016 Student Senate for California Community Colleges General Assembly (GA), the exact reason he got kicked out of the conference in 2014, and Diefenbacher made yet another inappropriately timed comment when he said, “I just don’t want to be sober around these people” while discussing why he wasn’t attending this GA.

Diefenbacher insists that his comment was made as a joke, but is that really something to joke about when violation of GA’s alcohol policy is what got him removed last time he went?

He seemingly shows no remorse for his past transgressions and sees his role as a student leader as a joke.

Now, if he truly is joking and sees his past mistakes as something to laugh about, then he is also laughing at the students and faculty who have put their trust in him.

He is quoted in a previous Current story as saying “I’m on campus 14 hours a day between classes, work and my involvement in student government,” and “A three day retreat focused on parliamentary procedure is the opposite of productive at the end of my academic journey at ARC.”

If Diefenbacher feels Student Senate is now nothing more than an impediment to his academic progress, why are we trusting him to represent our intentions as students?

Hylton originally said he was not taking his role at GA lightly and that he wouldn’t “smoke reefer” or “drink booze” this time around.

However, in a separate interview with the Current, he contradicted this statement and said that he wants to bring a marijuana prescription to GA and that it would be discrimination by the ARC administration if they prevent him from going because of it.

No, this isn’t technically against school policies, but it would seem to stand against common sense. Does he not see how his open refusal to represent the student body sober calls his behavior as a whole into question?

Is he so arrogant to think that he deserves a spot at GA after being removed in the past?

He should feel honored that the school is taking a chance on him after he’s already wasted their time and money.

ARC students should feel outraged that these elected officials continue to not only waste their representation but their money, which is spent to send them to events such as GA.

Although Hylton and Diefenbacher are on their way out of ASB, they should have stepped down long ago. They’ve soiled the reputation of student representation, and it’s time for the culture of irresponsibility to be cast aside.

New leadership that takes its job seriously needs to step up and take over.

If Hylton and Diefenbacher have any regard for the students they represent, they would expedite the process by stepping down immediately and not seeking office again.

In Hylton’s case, students have already expressed a general disapproval towards his job as president.

In October he came under fire after making comments questioning the conduct of Israel and supporting Student Trustee Cameron Weaver, who said he was “skeptical” of the Holocaust. A recall vote was held against him and 72 percent of the students who voted said they wanted him removed from office. The vote didn’t meet the 75 percent that is required for recall.

Hylton has said countless times in the past that he wants to hear the opinion of the students, but when their opinion is that he’s doing a bad job, he does nothing.

These most recent incidents add to the ever growing list of comments and actions perpetrated by these two that express their complete lack of understanding of ‒ and respect for ‒ the positions they hold as advocates for ARC students.

Hylton and Diefenbacher have both spent multiple years on the ASB boards and continue to express childish behavior.

It’s time for them to step down and let more capable, responsible people take their places.

Be the first to comment on "Editorial: ARC student leaders lack leadership"