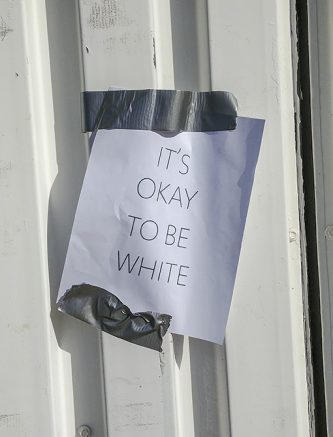 An unauthorized flyer was found posted to the ticket booth at the far right side of the football stadium near Parking Lot S. At least two flyers were found on American River College’s campus on Nov. 1 2018. (Photo by Jennah Booth)

At least two flyers were found this morning on American River College’s campus, each one reading: “It’s okay to be white.”

One sign was taped to the gym doors and the other was posted on the ticket booth on the right side of the football stadium, near Parking Lot S.

ARC’s Public Information Officer Scott Crow addressed the unauthorized flyers in an email to the Current.

Staff are removing the signs as they are found and the Los Rios Police Department is looking into the incident as well.

ARC President Thomas Greene sent out an email just before 1 p.m. addressing the increase in hate speech and racist vandalism on Los Rios campuses as well as the unauthorized flyers. 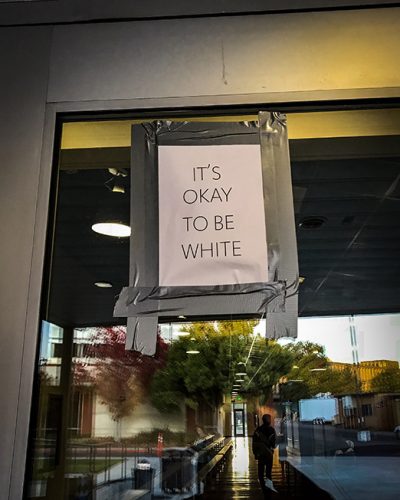 An unautherized flyer was found posted on the gym door at American River College on Nov.1, 2018. At least one other flyer was found on campus the same morning. (Photo by Tracy Holmes)

“I wanted to let the ARC campus community know we are ramping up our efforts to quickly identify and address incidents of hateful graffiti,” Greene wrote in the email.

ARC is increasing its custodial checks in restrooms and other high-risk areas. If hateful graffiti is found, it will be removed by staff as quickly as possible and will also be reported to the LRPD, Greene wrote.

“We will communicate to the campus community if there is an incident of graffiti that involves a law enforcement investigation,” he wrote. “Hate has no home on our campus.”

Greene encouraged students to report hateful graffiti to the LRPD.