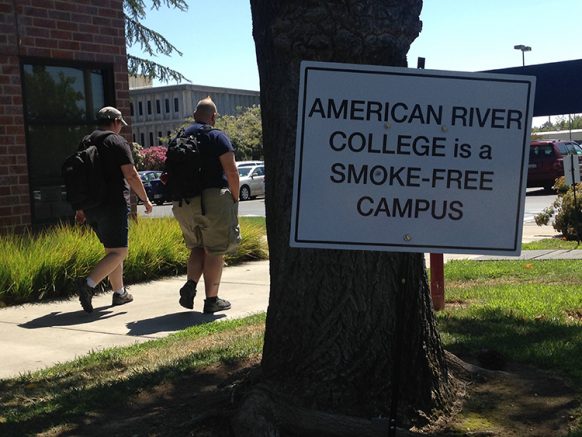 Leah Cato (left) and Ryal Strom (right) walk back to class after their cigarette break at the edge of the campus. American River College has been smoke-free since January 1, 2016 and does not provide smoking sections. (Photo by Robert Hansen)

By Robert Hansen and Mychael Jones

Smokers at American River College have been relegated to the edges of campus without smoking sections or ashtrays since the smoking ban went into effect Jan. 1.

The amount of cigarette butts scattered around the bus stop on College Oak Drive in front of the administration building is piling up without designated smoking areas.

Los Rios campuses implement their own rules on the system-wide ban on smoking and although Sacramento City College and Folsom Lake College have designated areas, ARC is completely smoke and vapor free.

Ryal Strom, an ARC student, risks being late to some classes because of having to smoke at the edge of campus.

“Sometimes I only have 10 minutes in between classes,” Strom said. “And then there are no ashtrays so I’m forced to litter.”

According to a campus survey taken before the smoking ban, 76 percent of students and 83 percent of faculty supported a smoke-free campus. However, there have been no steps to help smokers not litter.

Leah Cato, ARC student and smoker, feels that without a smoking sections on campus, some smokers could suffer from stress.

“They cut off so many smokers,” Cato said. “It doesn’t make any sense because they took a stress reliever away from a bunch of students.”

Shelby Takens, non-smoker, thinks that a smoking section would be fair for smokers.

“I feel like it’s kinda silly to make them walk so far across the street,” Takens said. “If it’s outside in a small area for them to smoke, it isn’t a problem.”

With a population of nearly 30,000 students, statistics suggest there are over 3,000 who smoke. This could lead to an even larger litter problem on the edges of campus.

Victor Garcia, an ARC student and non-smoker, said that although he has asthma he would be fine with smoking sections at the edge of campus.

“As long as I don’t have to walk through cigarette smoke I wouldn’t have a problem (with smoking sections),” Garcia said. “My friends vape around me and I’m fine.”

“Although smoking is not good for people,” said Sahak, non-smoking ARC student, “I think it would be better (to have smoking sections).”