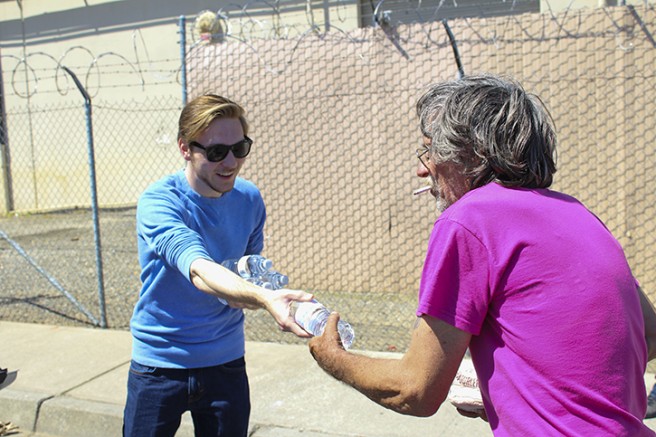 American River College Film Club president Vince Blake (left) hands a water bottle to a homeless man near Loaves and Fishes in Sacramento. Blake, 19, said he hopes to get more ARC students involved with helping out over time. (Photo by Timon Barkley)

An American River College student helped local actor Sosa Hernandez hand out food to the homeless near Loaves & Fishes, a local nonprofit that provides daily meals and shelter to those in need, in Sacramento on Saturday.

Vince Blake, president of the newly formed Film Club, was thankful for the opportunity to be involved with helping the homeless that Hernandez provided him.

Blake, 19, who had been looking for an opportunity to help the homeless since high school, helped Sosa hand out McDonald’s hamburgers and bottled water to the people living in small tent camps up and down Ahern Street just north of downtown.

Hernandez has built a rapport with this small community of homeless people in the area after about three months of coming out on “most every” Saturday and passing food out from the back of his Range Rover.

Randy Horn had mainly worked as a non-union laborer and is “trying to get it together” after being homeless for about a year.

He usually gets a spot to sleep at a nearby mission and when he can’t, looks for a friend that has a concrete slab where they can pitch their tents.

“Thank you so much, God bless you,” Horn said after receiving food. “He’s (Hernandez) such a nice guy.”

Byron Burnett has been homeless for about four to five months. He mainly sleeps on the sidewalks of Ahern Street and North B Street.

“It’s a blessing these guys are here,” Burnett said. “This guy must be wealthy or something, he’s giving away hot food. God is good to him.”

“I do this with my own time and money,” Hernandez said. “It’s a blessing when they’re happy, to see them smile.” 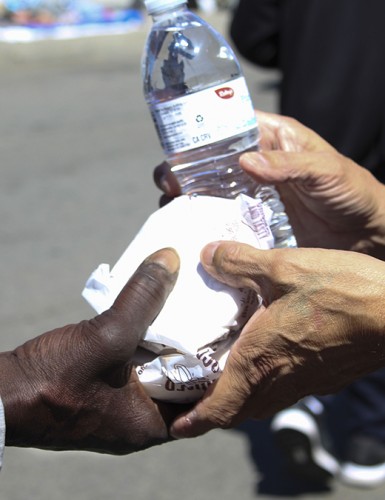 Local actor Sosa Hernandez hands food and bottled water to a homeless man near Loaves and Fishes in Sacramento. Hernandez uses his own income to purchase these supplies and said he does it because he feels he should. (Photo by Timon Barkley)

“It’s contagious,” Blake said. “You want to come back and help them.”

Blake also said he enjoyed the ease of being able to get involved and help.

“It’s nice to work with people who are already connected,” Blake said. “This is a lot more convenient way for me to get involved.”

Blake hoped to have other members from the Film Club come help give food away but because there was short notice, no others could make it.

“I really wanted other people (from the Film Club) to come out but, being busy college students, they all already had other plans.” Blake said. “It would be nice to get the club involved outside of school to help the club continue on.”