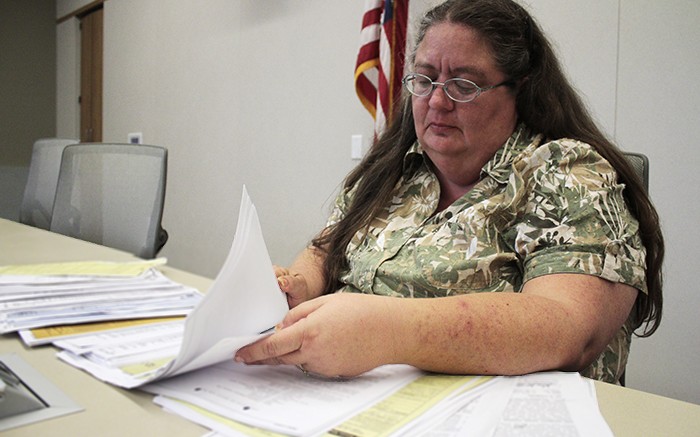 Update: The previous version said that Tamara Dunning said she was sexually assaulted three months into her boot camp training, however, she was already out of boot camp when her alleged attack took place.

She had been 18 years old for just three months when she said she was attacked and sexually assaulted by a male soldier. Her attacker was never convicted of any crime relating to that night, and because of the statute of limitations, he never will be.

“This isn’t just something that happened,” Dunning said of her assault. “This is my life. This affects every corner of my life.”

Dunning’s recovery has been challenged by the long, ongoing process of trying to prove to the Department of Veterans Affairs that she was raped and needs treatment and disability payments, in spite of the fact that the man she accuses was never convicted.

While Dunning is being treated by the VA for post-traumatic stress disorder, which she has been diagnosed with relating to the incident, she is not receiving benefits from the military for a service related disability.

According to the VA, she needs new evidence to support that she has been sexually assaulted. For three years, when requesting her service files, all files related to her assault were omitted.

Dunning recently received all of those documents through the Freedom of Information Act. They show that her PTSD diagnosis goes back to when she was still in the military, but still does not prove the rape in the eyes of the VA.

Dunning said in her statement during the investigation that after being driven to her barracks by the man she accuses, he asked if she wanted to go on a walk. She was then tackled from behind, tried to fight him off, hit him with her fist, and yelled at him to leave her alone.

Both Dunning and the man took polygraph tests to answer questions to see whether they were lying or not about the assault.

“Keep in mind, I’m in the service at the time,” Tamara said. “Someone tells you to do something, you’re not questioning, you just go do it.”

Dunning’s answers are essentially the same throughout the process, while the answers of the man she accuses changed over the course of the investigation.

According to the records provided to Dunning, the accused attacker claimed to have been in his barracks during the time that she said she was attacked. However, those same records indicate that not only can no one place him where he said he was, but that they were actively trying to find him.

The accused attacker initially said that he did not know Dunning, but later said that he had consensual sex with her. His own polygraph results came back to be inconclusive.

One of the symptoms that Dunning has to deal with since her assault is hypervigilance. She feels uncomfortable with encountering new buildings, and not having more than one exit to a room.

Dunning said that she still has nightmares about the assault.

Her husband, George Dunning, said that in order for Tamara to go sleep, she needs to do so before him.

“She needs someone that is watching over her as she goes to sleep,” George said.

Sometimes Tamara said that she could feel George attempting to comfort her by putting his arms around her as she’s having a nightmare.

George said that when at home while they are watching television, he would change the channel if something were to come on that could potentially cause a trauma trigger for Tamara.

“I don’t like it. It makes me angry,” George said about how he has to watch Tamara relive her assault. “It makes me want to, if I could reach in back in time to slap the crap out of this guy for doing what he did to her.”

Tamara said that the military wouldn’t have given her an honorable discharge if it believed that she was lying about her assault.

It is estimated by the Rand Corporation that one in four victims filed a report in 2014, compared to one in 10 in 2012.

The Rape Abuse and Incest National Network runs a counseling hotline for victims of sexual assault. Their number is 800-656-HOPE (4673).