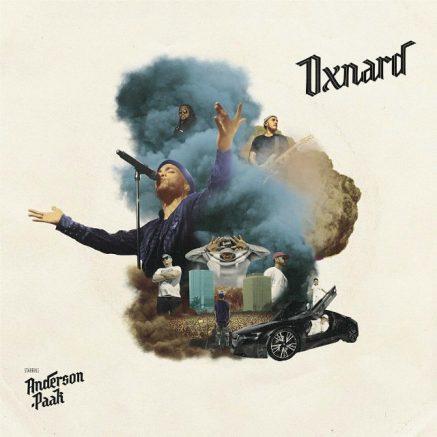 It was just three years ago when Anderson .Paak made his unique voice and soulful presence felt in the rap game after being featured four times on Dr. Dre’s album “Compton”. After his status skyrocketed, the world was exposed to more appearances and all the talents .Paak brings to the table, including his ability to play the drums.

His last album, “Malibu,” which was released in early 2015, came after .Paak spent most of his 20s virtually unknown and was far outside of the mainstream music industry, but his makeshift, and reflective approach to creating the album caught the attention of people everywhere.

Now, following his trend of albums named after locations in Southern California; “Venice,” and “Malibu,” .Paak finally delivered his newest album executive produced by Dr. Dre, and named after his hometown, “Oxnard.”

The album is in true .Paak fashion, as it showcases interesting flows throughout each verse, beats that sound inspired by multiple genres from funk, to soul, to R&B, to rap that come from different producers including .Paak himself. “Oxnard” also offers a variety of lyrics, from fun punchlines to lyrics dealing with societal issues that have affected his life.

The 14-track “Oxnard” excels in its cohesive sound and feel from the first song all the way to the last song. Each song has its place on the album, and the featured artists all play their role well and don’t feel forced. The features include big names like Kendrick Lamar, Dr. Dre, Pusha T, Snoop Dogg, J. Cole, and Q-Tip.

The first single that released prior to the release of “Oxnard”, “Tints,” is a fun song that includes an appearance from Lamar, as the two Southern Californian artists complement each other well with their recognizable voices and flows that fit nicely on the instrumental.

Fame has come with attention and a decline in privacy for .Paak, so he raps about his desire to keep to himself and how he’d rather keep out of the eyes and lenses of paparazzi. In “Tints,” .Paak repeats that he’d rather hide behind some tinted windows of a car, while also using tints as a metaphor for hiding personal information from the public.

“6 Summers” is another standout, where .Paak, comments on a few social issues regarding Donald Trump’s presidency, and gun control. The first half of the song pokes fun at the alleged illegitimate child that Donald Trump had with an ex-housekeeper as .Paak describes the child he hopes Trump has.

“Trump’s got a love child and I hope that b*tch is buckwild, I hope she sip mezcal, I hope she kiss señoritas and black gals, I hope her momma’s El Salv(adorian), I hope her poppa stick around,” .Paak says.

“6 Summers” then transitions into a smooth and minimal instrumental that occupies the second half of the song, as .Paak touches on the increasing occurrence of shootings in the US.

“Trippy,” is a smooth song featuring North Carolina rapper, J. Cole. The track deals with the topic of love, and is accompanied by a laid-back instrumental accompanied by an angelic-sounding vocal melody. The song focuses on the admiration of partners and the assurance of being there for each other.

“Come meet me in the middle, right there where you always be, somewhere in between, you and I will always be,” .Paak repeats in the hook.

“Oxnard” overall is another solid album in .Paak’s discography. The balance of melody and rapping is effective at keeping ears intrigued and keeping a desire to hear what comes next from the singer. .Paak’s initiative to make an album that only he could make, and not following current trends is also a breath of fresh air and continues to solidify his status in music.

.Paak’s previous album “Malibu” may have more replay value, and may receive more praise down the road, but “Oxnard” should satisfy .Paak fans until his next album arrives. It serves as another dynamic album from a voice that can only be heard from one man.

Be the first to comment on "Anderson .Paak brings it home with Oxnard"