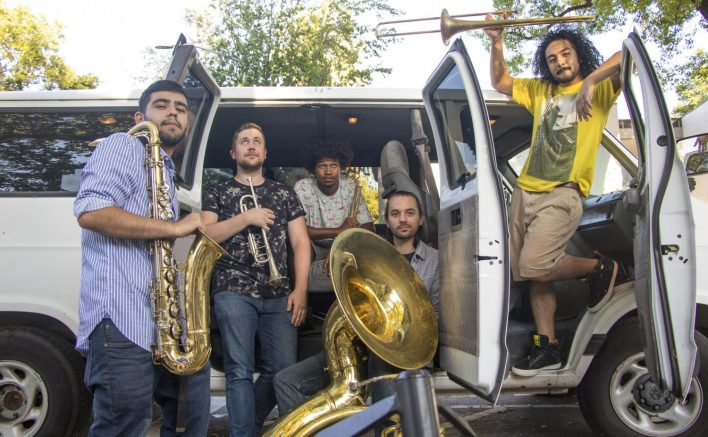 The smell of intoxication fills the air as an excited crowd stomps and claps along to a sousaphone, its deep sound bellows off the muraled brick walls. The scene makes it seem like you’re in the center of New Orleans.

Under a string of lights, beer steins clink around the courtyard as more brass instruments accompany the sousaphone bringing out the full sound of the second line. Though it’s not in the heart of Louisiana, City of Trees Brass Band brings a piece of the city of jazz to Der Biergarten in Midtown, Sacramento.

American River College alumnus and manager, Ben Hillier, is one of the many musicians that brought these sounds of second line to the streets of Sacramento. He and other students began the process in 2013, forming the band while attending ARC.

Five years later, the City of Trees brass band owes its foundation to ARC for providing a space for everything from practice rooms, to mentors, to like-minded musicians, all under one roof.

“We were spending a lot of time in there, because we were invested in our craft and inspired by the campus,” Hillier says. “It was like a playground that we all go to, so ARC was like the platform that organize and united us.”

The brass band got its start five years ago when Hillier and friends Alan Ferreira, Josh Cambridge, Seamus Smith and the guy they refer to as Vanishing Scott hung out in the music department at ARC. Hillier begged them to start a band and though his friends resisted at first, they eventually gave in and formed the Brass-o-nauts.

The Brass-o-nauts took to the streets of Sacramento and before long they began to get noticed. It was then that Hillier and the band decided it was time for a name change. Within the halls of the ARC music department, a small practice room was crowded with the members of the Brass-o-nauts trying to figure out a different band name that fit their personalities.

During the meeting, band names started floating around the ARC practice room and one name that Hillier was torn with was the name The City of Trees Brass Band.

Unsure about the name, Hillier adopted it and throughout the months of them playing gigs on the streets people started remembering the name. Hillier and the band knew then they made the right decision.

Gaining more success, the band got to experience its first tour with another brass band. After a few gigs, they landed in Portland where they got invited to college party. They were hoping to play but one of the roommates who lived there turned the idea down. Disappointed at not being able to jam, the band joined the party.

The house was jammed packed with over 250 hammered college students who were dancing and drinking throughout the night. During the party, Hillier and the four members said they were approached by a tall guy who was wearing a robe and was accompanied by two ladies, one on each arm.

Hillier describes him as a 24-year-old with the demeanor of a 60-year-old Hugh Hefner. The young playboy lookalike asked them to play. He led them to the garage that was complete with a halfpipe. With excitement in their eyes and instruments in their hands, they piled on the halfpipe stage and began to play. The inebriated 20-somethings crammed into the garage, lured by the sound of the brass music.

“I realize I could hold a sousaphone and feel like a rock star at the sametime,” Hillier says.

But it wasn’t the intoxicated college kids that made Hillier realize his band had made it, that came when he took the band to where brass music really came from: New Orleans.

In 2016, the group decided to take their horns to the motherland of brass bands. There, they immersed themselves into the music instead of playing, but their mentor Bill Bua, also known as the band’s “jazz dad,” had other plans.

Bua had connections with countless local musicians in New Orleans, many of which were known to play in the streets. The band was told to grab their instruments, because they were going to get the opportunity to play alongside jazz greats like Doreen Ketchens, a famous clarinetist in New Orleans.

There, he saw locals “stepping,” which is a form a dance in which performers dance and walk at the same time to the beat of the music. Seeing locals enjoy their music, Hillier says he knew his band was doing something right.

Hillier’s journey at ARC may have ended, but he left his professors proud of what he and his fellow bandmates accomplished in the span of five years, including ARC music professor Joseph Gilman.

“It’s wonderful and very rewarding [to see their success],” Gilman says. “I’m happy I choose this career path because you are making a differences in people’s lives.”

The band has since expanded from five members to 40 members which includes 19-year-old ARC trombone player Miguel Recendez, one of the youngest band members. While listening to brass bands in high school, Recendez says he never thought he would be a part of one.

“That would be cool to be apart of [a brass band], but I doubted I would come across anything like that, but here I am playing in one and I didn’t expect that,”  Recendez says. “It’s pretty cool and I like it.”

Now, Hillier is living his dream as a full-time musician and still gets to play alongside his friends.

“The City of Trees means so much to me, because I don’t need to worry about my purpose in life is and I have a community of people that care about each other,” Hillier says. “I get to spend time with my friends who are constantly encouraging me to be the best version of myself.”

Music recitals are being held until Monday