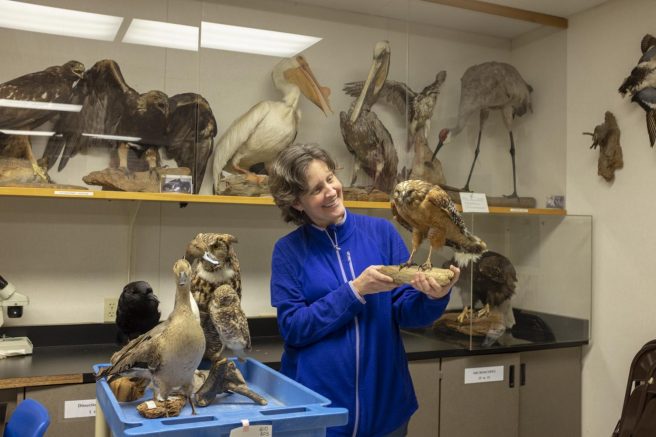 Biology professor Kathryn Bradshaw holds a red-shouldered hawk in a biology classroom at American River College on Feb. 22. Bradshaw maintains the collection, most of which once belonged to a museum. (Photo by Ashley Hayes-Stone)

A typical American River College classroom may not look like much; a few desks and chairs, a whiteboard up front, and maybe some educational posters.

However, behind the doors of Room 492 in the Science Building on the north side of campus, cabinets are full of yellow-billed magpies and snowy egrets. Above students’ heads there are swooping barn owls, and on top of a shelf in the corner, a river otter perches on a log above a ‘freshly caught’ fish.

The room is busy with animals that are part of a collection of over a thousand taxidermy specimens, some of which date back nearly 150 years, and most of which are native to California.

“It’s a big role for me to fill,” Bradshaw says. “This is a collection that has been amassed over such a long period of time.”

Brenchley-Jackson was in charge of the collection for 23 years prior to her retirement. She said the responsibility was massive for her because she had almost no experience with museum collections.

“[I wasn’t sure what to do] until I really learned and appreciated both the science and the art of museum collections,” Brenchley-Jackson says. “The techniques that we use at ARC, if you can believe it, are the same techniques used by museums all over the world.” 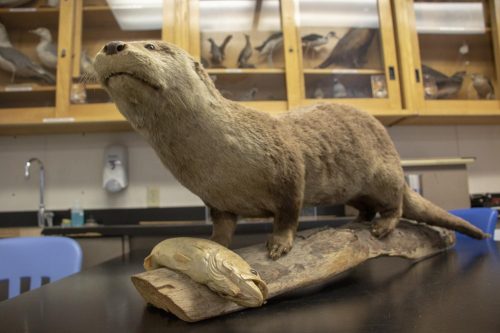 A taxidermy river otter stands on a log above a fish that appears freshly caught, on a counter in the classroom that houses most of the specimens in the taxidermy collection at American River College. (Photo by Ashley Hayes-Stone)

The protocol used is extremely precise, even specifying the pen to use when tagging the specimens. Brenchley-Jackson learned the techniques during a semester-long sabbatical at University of California, Davis, and applied the techniques she learned there to the animals at ARC.

“It allows them to appreciate the different traits that an animal has,” Brenchley-Jackson says. “I have a gazillion stories where students see these traits, like the thumb of a bird.”

The animals mostly came from a donation from the American River Science Museum after it closed its doors in 1950, according to the professors. Five years later, ARC was founded and the museum left the college with an enormous collection of taxidermy animals.

One of the birds in the collection, a white-bearded manakin, was collected in Columbia in 1898. The most interesting aspect of the specimen for both Bradshaw and Brenchley-Jackson is the name on the tag, “Mrs. H.H. Smith.” In the late 1800s, a woman collecting taxidermy was still highly uncommon.

“What in the heck was a woman doing on an expedition in the 1800s?” Brenchley-Jackson says.

After doing some research on the woman who collected the manakin, Brenchley-Jackson found that her maiden name was Daisy Woolworth, partner to Hubert Humphrey Smith, and a well-regarded field dresser. According to Brenchley-Jackson, Woolworth would join the expedition to skin, stuff and catalog the animals they collected and was relatively prolific in her field.

“What I learned in my research, [Woolworth] was a partner, not an assistant to [Smith], and was very likely a person that propelled his career in museum work,” Brenchley-Jackson says.

Preservation is highly important to maintain and preserve the animals for future generations of students at ARC, according to Bradshaw. Dermestidae are a family of beetle which feed on dead skin and can destroy taxidermy animals if proper maintenance procedures aren’t taken to monitor the shelves, which house a majority of the specimens.

“They’re continually a bit of an issue but there hasn’t been a major infestation in a long time,” Bradshaw says.

New animals continuously enter the collection as well, through the salvaging of already dead animals and from wildlife rescue organizations if an animal doesn’t survive with them. While hunting animals for taxidermy is not illegal, an overwhelming majority of the animals in the collection come from salvage.

One of the specimens in the collection is the skeleton of a great blue heron, assembled by Bradshaw and Brenchley-Jackson, which they constructed for 100 hours over the course of a year, based on photographs and Bradshaw’s understanding of anatomy. The bones were a donation from UC Davis.

The collection is mostly made up of birds, however there is a variety of mammals as well. Two additions that Bradshaw acquired in the last year include a bison and an elk, both of which have massive horns protruding from the bone and hang on opposite ends of the classroom walls. 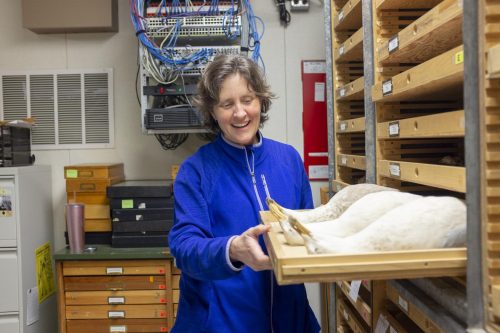 Biology professor Kathryn Bradshaw pulls out a storage rack of taxidermy seagulls in her classroom. (Photo by Ashley Hayes-Stone)

A variety of animals hang above the students, each of which are posed in different ways that resemble actions the animals would have performed while alive.

“Once in a while I’ll have a student who thinks that the coyote is watching them, so they’ll ask, ‘Can you just turn it around so I don’t feel like it’s watching me?’” Brenchley-Jackson says.

Bradshaw pointed out a barn owl with its wings wrapped in front of its body. The owl’s talons glistened in the fluorescent lighting and its penetrating glass eyes seemed to stare directly towards one of the classroom’s chairs.

“I’ll have students staring up at it. What does it feel like to be in that gaze?” Bradshaw says with a laugh.

But the animals are meant to do more than freak students out. Bradshaw uses them as a way to teach the students about the animals that are in their own backyards.

“Our natural history class really focuses on California, which is so cool because … it’s a hotspot of biodiversity here in California,” Bradshaw says. “With slides and the internet we’ll learn about the birds, but there’s really no substitute for seeing the actual specimen right in front of you.”

In some cases there may be no other way for a student to see the animals except as a taxidermy specimen in the collection. In the back corner of the room, a bald eagle perches on a branch, peering out to the classroom. Though the bird recovered from its endangered status federally in 2007, according to Bradshaw, it is still considered endangered on the state level.

Another closely endangered species in the room is the brown pelican, which was brought nearly to the brink of extinction but has since made some recovery.

“When we pass legislation that protects them, some of these species will rebound,” Bradshaw says. “Bald eagles are being found in places they haven’t been in 30 or 40 years.”

The purpose of observing the taxidermy is not only for people in the field of biology, according to Bradshaw. The class is geared towards students who can gain a better understanding of their environments and by doing so, gain a deeper appreciation for the ecology.

“The more time that [students] see them in the classroom, then they recognize them in the field,” Bradshaw says. “I hope that that’s a lifelong love that they acquire starting here, and recognizing how rich this world is that we live in.”