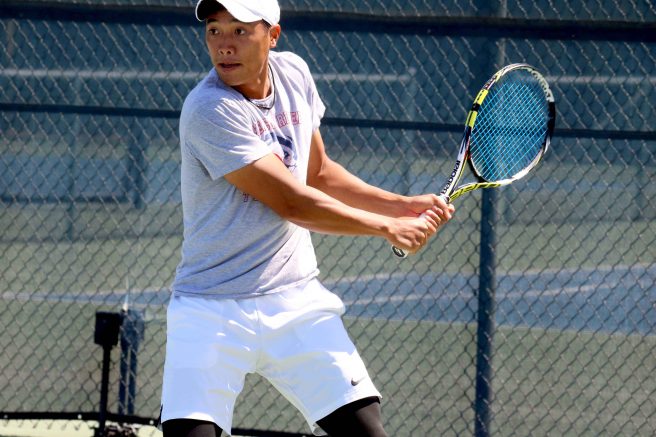 Tam Duong is a sophomore tennis player for the American River College men’s tennis team. He along with his teammates played against De Anza College. (photo by Mychael Jones)

“Challenge yourself and see what you’re capable of,” Madison said.

The matches were a back and forth contest for both ARC and DeAnza, however ARC came out on top.

ARC needed five points out of nine to win the game and received three points from its doubles matches with two points from singles.

Madison said their game at ARC against De Anza was a good opportunity to advance to the Nor Cal Championship.

“It’s a good team and a good challenge,” Madison said.

A player that stood out according to Madison was freshman Pete Gibson who helped get the final points in his 3-2 match.

“Pete Gibson got the clinching win to close us out,” Madison said.

Gibson said he did his job and wanted to improve on how he plays while moving forward towards their match against Foothill College.

“We have a lot of momentum,” Gibson said.

During one of the sets a player from De Anza was injured and was seen by a medical official.

The medical official did not disclose any information.

His opponent Cody Duong had said he focused on his own game and knew what he had to do to win.

“I knew my opponent had a weak backhand,” Duong said.

ARC won against Foothill College in a 5-1 game.

ARC will face off with Irvine College at the 2017 Ojai Tennis Tournament in Southern California on April 26 at 11 AM.