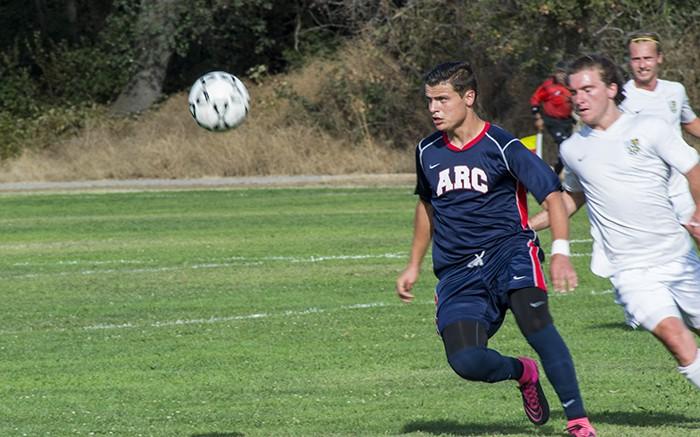 American River College forward Hector Zavala, left, moves the ball downfield during ARC's 1-0 loss to Feather River College on Aug. 28, 2015. FRC scored the only goal of the game early in the first half. (Photo by Joe Padilla)

Despite having the ball for a good portion of the game, American River College men’s soccer team was unable to score in its first game of the season, losing to Feather River College 1-0.

After this, ARC was unable to get any kind of meaningful offensive movement down the field.

ARC was able to drive the ball up field throughout the game, but lost its momentum in the last third of the field.

“We did good, really good actually,” said Eduardo Cervantes-Magana, who plays midfielder. “For our first time, we played really good. We just need to finish our chances that we had. Just finishing, and finishing opportunities.” 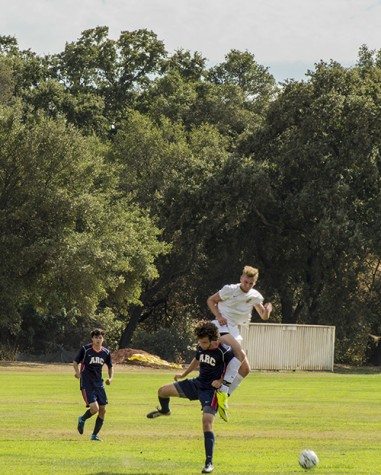 [/media-credit] Two players fight for the possession of the ball in ARC’s season opening loss to Feather River College. ARC had control of the ball more frequently throughout the match but did not score, losing 1-0. (Photo by Joe Padilla)

Paul Hansen, head coach of the soccer team, said other than the goal that Feather River was able to generate, he was happy of how his team was able to defend.

“Honestly, our movement and our attacking at the final third of the field is the issue of concern right now,” Hansen said.

During the second half of the game, a confrontation between an FRC player and defenseman Noe Romero.

“We kind of collided against each other,” said Romero, who was involved in the altercation. “I hit him, he hit me. He hit me right here with his white cleats, that’s where I got pissed.”

ARC will be competing in a tournament next weekend, which will begin at California State University at Monterey Bay.

“We get the opportunity to play the state champion Cerritos, which is obviously the highest test,” said Hansen. “Then we play Irvine as well and then Hartnell who was the previous champion of the previous year.

“We’re going to face the best talent of the state, and we’ll see what we’re made of.”

Everything you need to know about ARC’s Wi-Fi