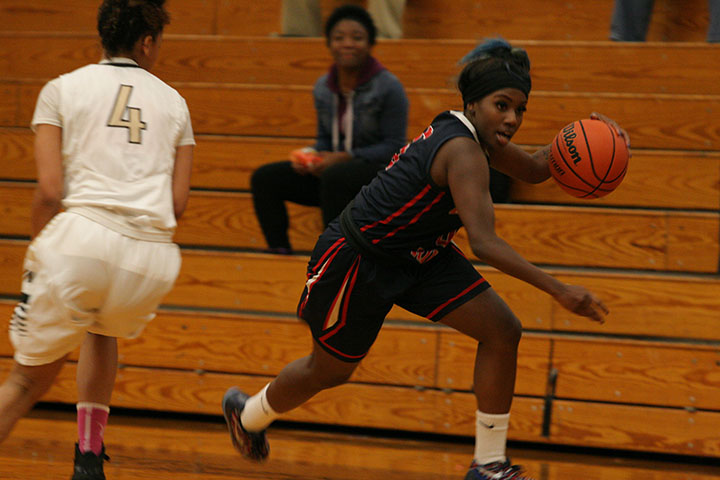 By Kevin Sheridan and Matthew Peirson

American River College women’s basketball team lost its last game of the season at San Joaquin Delta College 91-55, coming out so flat that head coach J.R. Matsunami pulled four of her five starters after less than two minutes of play.

ARC trailed big early, playing against a 17-point deficit with the score at 24-7. SJDC’s defense clamped down, and ARC was unable to respond.

Matsunami called three timeouts in the first five minutes, a tactic she says was meant to slow the game down.

“Delta’s one of those teams that they try to bring that big rush at you in the first five minutes and we were getting bumrushed out of the game, so it was just to try to stop momentum from them,” she said.

Matsunami also pulled the majority of her starters early in the first period.

“They had momentum going for them,” said guard Jazlynne Macklin on why Matsunami replaced the lineup. “So I guess she wanted to get us into the game.”

Added Macklin: “We weren’t swinging the ball properly, and we weren’t getting back on defense.”

ARC started the second half poorly as well, giving up 17 unanswered points.

SJDC held ARC without its first field goal after halftime until a Kamari Hunter at the 12:55 mark, and in the process led by as many as 40 points.

ARC even scored 13 points in a span of about three minutes, but trailed by 35 points after that stretch.

The loss means the women’s team will finish with a record of 10-16 overall and a 5-9 record in conference play to finish the season.

“Pretty good,” said Macklin on her performance. “Missed some shots but had fun, so that’s all that really matters.”

Macklin, a transferring sophomore, spoke highly of her time on the team.

“These two years have been the most fun of my basketball career. I’ve never been around such a fun, accepting environment.”

Macklin said perseverance is the most important thing she’s learned in her playing time.

“Not giving up is one of the best things I’ve ever done.”