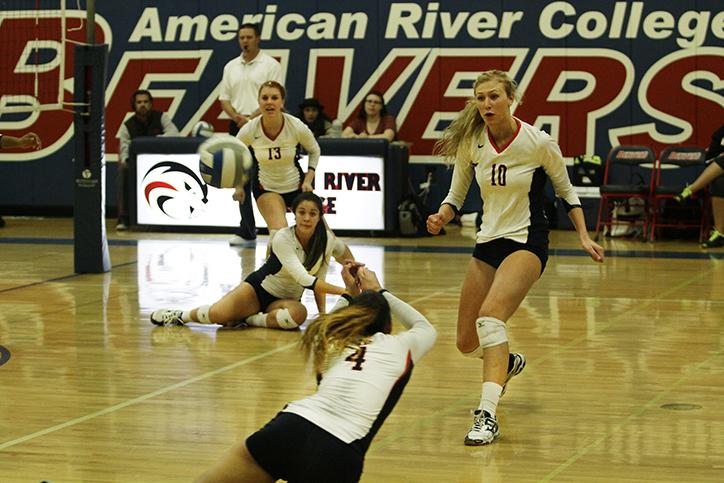 Erika Jones diving for the ball during the volleyball game against MJC Thursday.

Overall, the team performed well, winning the match in 3 straight games, with the last match ending in a 3-1 victory.

“It’s really hard on the road,” said coach Ashlie Frame. “We are a lot more comfortable in our gym, because we live here every day. So it was nice to see that we got better than maybe we were when we played them a few weeks ago.”

While the girls scored first in two of the three matches, they were slow to gain momentum.

“I feel that when we start, we feel a bit anxious and a bit nervous and then somebody does something good and we are like ‘OK, we can play volleyball,’” said the team’s co-captain Erika Jones.

ARC started the first match by quickly scoring against MJC, who responded in kind, tying the score.

As the match continued, ARC would pull ahead even further, leading MJC to call another timeout when the score was 18-11 in ARC’s favor.

During one particular rally, it seemed almost definite MJC would score. As they hit a spike, Jones dove for the ball, a mere instant away from hitting the ground, and sent the ball flying into the air, allowing ARC to return the ball and eventually score.

ARC scored the first point again in the second game of the match, but once again lost the lead right after.

ARC and MJC struggled for control of the ball, seemingly evenly matched, until Jones hit a powerful spike against MJC, rallying ARC to overtake MJC.

After the tie, ARC started an onslaught of points against MJC, taking a commanding lead of 20-15.

The third game started with the first point going to MJC.

MJC kept the lead until ARC player Erianna Williams ran in for another decisive spike, tying the match at 5-5.

However, MJC continued to score until they turned the ball over and Monica Udahl stepped up to serve for ARC.

Udahl’s serves seemed to rally ARC, enabling them to tie up the match, and eventually overtaking Modesto.

Wastebook: The effects of social media on society

Be the first to comment on "ARC volleyball spikes Modesto"