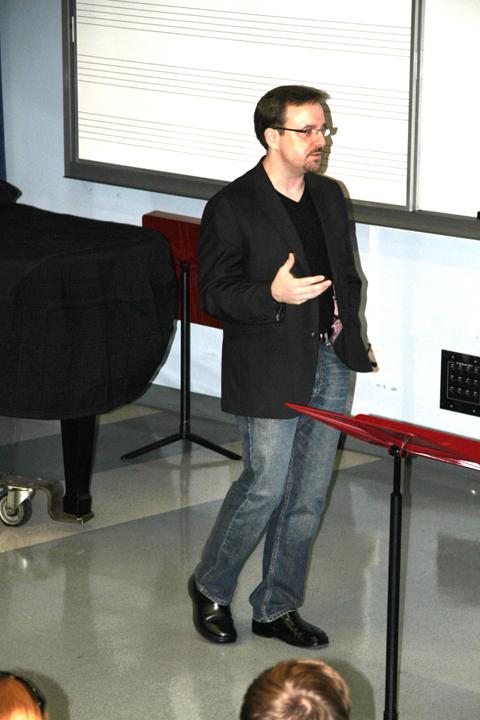 Prof. Eifersten lectures during his class. (Photo by Brandon Nelson)

<!— Rock and Roll, Eifertsen, Human Services, American River College —!>
When you recall a familiar song you heard at a random point in time, you start taping your toes as memories of concerts flood your mind. Whether it’s classic rock ‘n’ roll or new age rock, it’s a binding force that affects everybody. On campus we are fortunate enough to learn the rich history of that modern form of music.

MUFHL 308 Introduction to Music: Rock & Roll helps students gain insight as to how the rock ‘n’ roll industry came to be.

During the course students will study famous artists such as Elvis and Jimi Hendrix, and iconic bands such as The Beatles and Grateful Dead. Whether they’re listening to a sound clip or waiting for class to start, it’s clear that every student in class is bound together by rock music.

Professor Dyne Eifertsen described why his class is such a huge success. “I think it kind of sells itself as far as being rock ‘n’ roll,” he said. “It’s popular for young people. I think (there are) some nostalgic aspects for older folks who come back to school, so it’s fun. There are a lot of young people experiencing early rock ‘n’ roll for the first time, and then there are older students that are re-experiencing early rock ‘n’roll.”

There are students of all ages currently taking his class, and they all seem to share a love for the music. Human services major Laura Jaster said, “It’s the most fun class I have ever been in.”

Eifertsen has been teaching at ARC for a little over 11 years, but he has been listening to rock music for as long as he can remember. Eifertsen has also been a part of several bands, including a Rolling Stones cover band. His background doesn’t stop there, however. He also has also performed in several rhythm and blues groups.

Eifertsen combines the standard PowerPoint presentation with music clips that span the rock era, from the foundation of rock in the 1930s to the popular tunes of the 1980s. He brings a great energy to class and teaches in a truly unique way.

“It’s the most fun class I have ever been in.”
Laura Jaster

Be the first to comment on "Take this class: MUFHL 308 Introduction to Music: Rock and Roll"