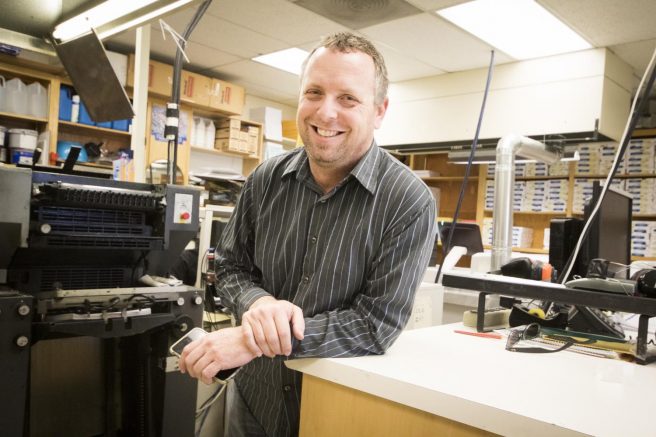 Don Reid walks into the tiny office that he plans to soon call home. The small station consists of gray barren walls, an old desk, a squeaky chair and a dusty typewriter.

The fluorescent lights cast a sickly green hue over everything. Reid picks up the ancient typewriter and tosses it into the nearest trash can.

It is the first change of many to come for Reid and his new role as supervisor for the printing services department at American River College.

As head of the largest print shop in the Los Rios Community College District, Reid has plenty of hard work ahead of him, but over the years, he’s taken upon himself to add even more responsibilities to his workload. He currently heads multiple committees focused around eco-friendly ideas.

With Reid’s efforts toward sustainability and eco-awareness, ARC was designated as an official Tree Campus USA in 2017.

Before Reid started his career at ARC, he was working as a graphic designer at the San Juan School District print shop, which had state of the art technology. 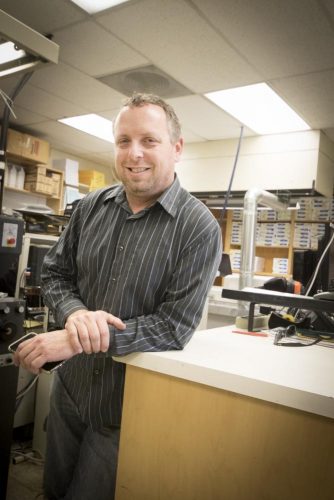 “We had a lot of vendors who would bring in their customers and see how we utilize their equipment,” Reid said.

One of those visitors was Marnell Nicknig, who was running ARC’s print shop at the time. Nicknig had visited Reid’s work several times to seek ideas to improve her print shop and became good friends with Reid.

One day Nicknig informed Reid she was going to retire and recommended Reid to apply for her position, but when he applied he was turned down.

“I did not meet the minimum qualifications; I didn’t have a degree,” Reid said.

After a couple of months, however, Reid got an email from ARC saying that they changed the qualifications and that the experience on the job would count towards a degree.

Reid applied for the job a second time, but had doubts about getting the position since he was up against 100 other applicants with more experience than him.

“I didn’t have the experience of managing a print shop, but what I did have was knowledge on how to future-proof this place,” Reid said.

According to Reid, it was his ability to think ahead that eventually landed him the job.

Reid immediately started a five-year plan that would turn the “old-school” print shop into a mean-green printing machine (with a heavy emphasis on the green).

He started making more eco-friendly choices such as using organic ink and buying paper that had less chemicals in it, making it more sustainable and also safer for employees of the print shop.

Soon Reid began to expand his eco-vision into other parts of the campus. Reid would go to other departments on campus and help identify where they could “go green.”

Reid also started programs like the Acorn Awards, which reward departments for their dedication towards sustainability.

According to Reid, being in the forefront of so many projects is against his nature.

“I’d rather be in the background, but somebody needs to be the face for this stuff,” Reid said.

One of his farthest-reaching projects involved getting rid of styrofoam cups in the cafeteria, a possible carcinogen and environmental pollutant that Reid felt could be replaced with a better alternative: recyclable paper cups.

He made it a point to not try and tackle the problem alone. As a faculty member, Reid saw it as an opportunity to get students involved. He approached the ARC’s Student Senate and Eco Club and got them to jump onboard.

His efforts culminated in 2013 when the new cafeteria was opened and it was announced that they would no longer be using styrofoam products.

Reid’s efforts got him the opportunity to speak at a CHESC conference. There, Reid pitched ARC’s model towards sustainability to representatives from nearly every California university.

“Don has done an incredible amount of work supporting sustainability at American River College,” Greene said. “He has been involved in countless college initiatives, including Earth Day, waste diversion and recycling, Tree Campus USA and so much more. American River College is a more sustainable, green campus because of Don’s tireless efforts.”

Groundskeeper Brenda Baker, who has worked with Reid on several projects, saw firsthand the work he put into the campus.

“If ARC had an Nobel Peace Prize, I would nominate Don. He really does care,” Baker said.

Still, according to Reid, his biggest accomplishment at ARC is, and always will be, his print shop.

In the 20-years Reid has been at ARC he has gone from having an old typewriter collecting dust sitting on his desk to running one of the most state-of-the-art print shops in Northern California. Under his efforts, ARC has become a model of eco-sustainability for all colleges.

“It’s not my nature to see a wall and just stop at it, I like to walk around the wall,” Reid said.

Going back to school is not as easy as you think