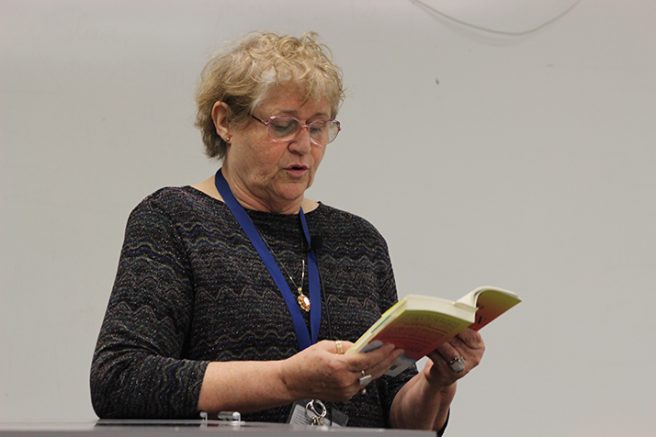 Author and ARC English professor, Lois Ann Abraham reads a passage from her novel “Tina Goes to Heaven during a College Hour speech on March 9, in Raef Hall room 120. Abraham has been published twice before both works by ARC's publication Ad Lumen Press. (Photo by Mack Ervin III)

‘Prostitution is not funny’ was the theme stressed at Thursday’s college hour with ARC professor Lois Ann Abraham’s reading of her novel “Tina Goes to Heaven,” in Raef Hall.

In the book, Tina, the protagonist, tells the story with sudden shifts in point of view, which Abraham said is “a technique that most creative writing classes teach their students to avoid.”

Tina has no money and no relatives so she is left to escape and fend for herself.

Although the novel’s central focus is the sex trade, “it is not so much about prostitution but rather her adjustment to not being a prostitute,” Abraham said.

There were some hard hitting quotes from the book interweaved with facts Abraham read aloud. “You’re 40 times more likely to die this year than your sister who is not a whore.”

It was stressed that the people in her book are meant to be funny, “I want them to take first that prostitution is not funny – that people are funny,” Abraham said.

Interestingly enough “Tina Goes to Heaven,” started out as a novella.

ARC English professor Christian Kiefer said “I know! Let’s all write novellas this summer and I was the only one who did,” Abraham said.

Even though she was a loner in the process of following through and writing the novella Abraham said, “It was an opportunity to go back and fill in stuff.”

Considering her book is about a topic loaded with numbers and statistics, Abraham jokingly admitted that, “Well it’s fiction. I just made it up.”

There were, of course, accurate facts but it was largely created by pure imagination.

Her inspiration for the novel did not come from primary, secondary or even tertiary sources but instead when she was watching television, Abraham said.

“You know that show ‘Wired?’ Well it got me to thinking all of these women show up and serve the gang, but what do the women do after? What about their stories?,” Abraham said.

This idea branched off and gave birth to to an entirely new idea. An idea that got her published, but that process did not come easily.

“Oh it was horrible. I went through over 100 agents,” and meanwhile “[Keifer] was lurking,” she said jokingly.

Beyond what went into the novel there is the aftermath.

ARC English major Jesse Armstrong said, “I haven’t read [Tina Goes To Heaven] yet but I really want to read it and after hearing her read to us I am even more excited.”

“She has a way of taking stuff… dry stuff and making it interesting,” Armstrong said.

Abraham may have just completed her first novel but she is no stranger to being published. “Circus Girl & Other Stories” was published in 2014 by ARC’s publisher Ad Lumen Press and she is also featured in, “Burning the Little Candle: An Anthology of Writing from the Faculty & Staff of American River College’s Creative Writing Program,” published by Ad Lumen Press in 2013.