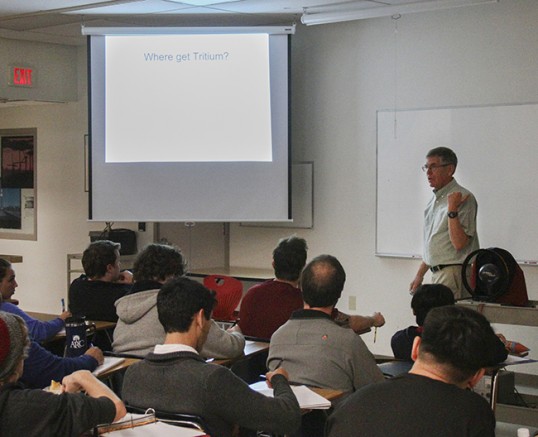 Speaker Chuck Hunt explains Tritum during his presentation on ITER on March 30. (Photo by Matthew Nobert)

Fusion energy, thermonuclear reactors and their impact on the future were the topic of a presentation given by former American River College professor Chuck Hunt on Wednesday.

ITER, Latin for “the way,”  is a nuclear fusion reactor being made through a collaborative effort of China, the European Union, India, Japan, Korea, Russia and the United States. It is also known as the Tokamok complex. Built in the South of France, ITER stands to be one of the greatest feats of engineering the world has ever seen.

Many students filled the classroom to listen to Hunt’s talk, which covered the effort going into creating ITER, the current problems facing fusion and how it will provide data on fusion for the future.

“They’ve been doing these calculations for years now … wondering how the sun gets it’s energy, working out different theories,” Chetty said.

Zachary Suchanek, an environmental engineering major transferring to Cal Poly, spoke on the amount of coordination and complexity going into ITER.

“I actually learned a lot…we learned about some of the techniques that went into building ITER, and it was really interesting,” Suchanek said.

There are 161 custom tools required to assemble ITER. Some tools will have the capability of lifting 1,500 tonnes—more than 3.3 million pounds.

Comparatively, the Statue of Liberty weighs about 450,000 lbs.

In addition to the incredible weight of the components, many of the pieces for ITER will need to be placed within two to three millimeters of tolerance.

“You have multiple nations building pieces of ITER, and you want it to fit within millimeters, you could have problems,” Hunt said.

Much of the talk centered on the fourth state of matter, plasma, and its role in nuclear fusion.

“Understanding (plasma behavior) has turned out to be a really ugly problem, because in math terms, it turns out to be a set of highly non linear equations. How do we solve those? We can’t,” Hunt said.

ITER will also serve as a way to collect data on plasma behavior, and will inform the scientific community on how to build better fusion reactors.

Timothy Lipuma is a first-semester student on the Current, where he serves as a staff member. He plans to transfer after graduation and is double majoring in Psychology and General Science.

Bay area artist hopes to establish himself at Kaneko Gallery