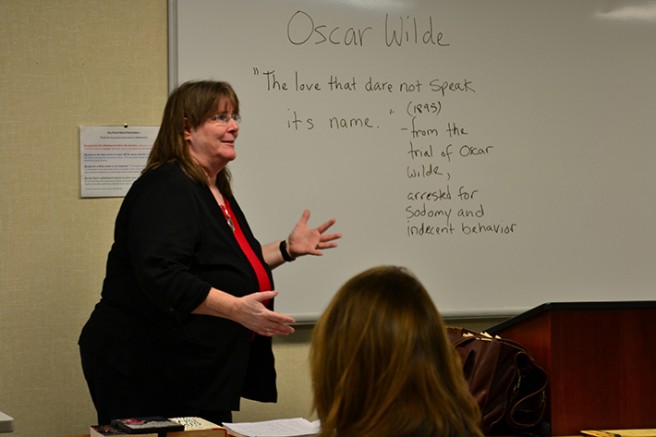 Professor Susan Howe teaches her Gay, Lesbian, Bisexual andTransgender Literature class at American River College. This semester is the first time the course has been offered at ARC. (Photo by Joe Padilla)

A former student, and now professor, at American River College, Susan Howe, has created a safe haven for all LGBTQ students on campus, while giving them the opportunity to earn college credits.

After noticing that there wasn’t a place for LGBTQ students to be free to express themselves, Howe created the first ever LGBTQ Literature class offered at ARC.

“Other colleges in our state and across the country teach LGBT studies,” Howe said. “So this is just a first step in trying to increase the number of classes we offer in LGBT studies.”

Susan Howe attended ARC and was interested in earning her degree in Psychology. She enjoyed reading case studies about diversity in everyday life.

Howe saw a connection between case studies and fictional characters in books she was reading, so she changed her major to English.

She has been teaching at ARC for almost 26 years.

The class was approved in the fall and is transferable to both UC and California State Universities.

Fliers were made and put up in the fall to promote the class, and Howe also asked English professors to spread the word.

Enrollment was low at first, but on the first day of class, 23 students showed up to keep the class alive.

Nikkita Erickson, a fourth-year English major at ARC, decided to take this class because it seemed interesting to her.

She believes other students should take this class because “it’s an important issue and it gives a lot more exposure to students.”

The course covers different works of literature dating from 560 B.C. to present day.

The purpose of the course is to give students a brief history of the LGBTQ community and how it is expressed through literature.

Howe hopes that after the course is over, students will see a reflection of themselves through the books, plays, and movies that are covered throughout the semester.

“I really want them to know that there are books out there that they can relate to,” Howe said.

The reason for the name change from LGBT to LGBTQ, is that Howe didn’t want to exclude anyone.

“The reason I want the ‘q’ on there is that I think there are many more people out there who don’t identify strictly as gay, lesbian, transgender, or bisexual, but they identify in a more fluid non-gender binary specific way,” Howe expressed.

After meeting with different teachers from the Los Rios district, she hopes the official course name will be changed to include the “q.”

The class has a very diverse group of students which Howe is very proud of – she wants to create a course that will appeal to those who may identify with diverse sexual and gender identities, a class that is inclusive to everyone.

Debbie Bruffett, an Anthropology and Communications major, expressed that “education is the key to breaking down stereotypes.”

Susan Howe hopes to continue to teach students about the LGBTQ community and the history of literature behind it all.

“You don’t have to be gay to be taking it,” said Reanne Acolsta, a Japanese major. “Even if you are straight, it’s just getting exposure to the community that’s been ignored for a very long time.”

Beavers slam Merced out of the park in doubleheader