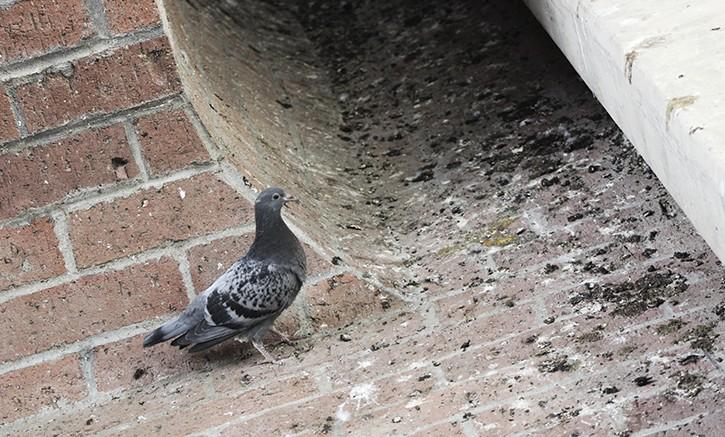 A bird sits on the west end of the bottom floor of the American River College library atrium on Nov. 17, 2015. Birds have been entering the atrium through holes in the netting, according to librarian David McCusker. (Photo by John Ferrannini)

The American River College library is battling a wicked, winged foe this semester — pigeons who have made a home in the atrium, flying in through a hole in the netting designed to keep them out.

According to ARC librarian David McCusker, one student even said that the library is a “great place to have pigeons s— on you.”

“The netting is no longer secure,” said McCusker. “It has deteriorated somehow and pigeons have gotten in. I don’t know if they know how to find a way out.”

McCusker said that the pigeons have been more of a problem this semester.

“It’s been a problem for a while — I’d say a significant problem starting this term,” said McCusker. “Now there’s pigeon crap everywhere. It’s gone from a curiosity to a significant presence.”

Librarian Deborah Ondricka said that she often sees pigeons from her office on the library’s second floor.

“They’re in there all the time. The pigeons are always looking for a way in,” said Ondricka. “It’s a nice home for them, not for us. They like to live in the lower levels.”

McCusker said that he has asked the school to repair the net, but that it is taking time.

“I don’t want to disparage maintenance or facilities, but it’s frustrating. … In many respects, it’s a very nice library,” said McCusker. “To have an area where 20 students could be studying and to have it impacted because birds might poop on them, that’s pretty significant.”

Dan McKechnie, the chair of the Building, Grounds and Safety Committee, said that the school plans to have the net fixed as soon as possible but that there are special challenges presented by the high location of the tear.

“There’s a breach in one of the upper corners,” said McKechnie. “That’s what makes it different, because it’s up so high that you have to rent a lift that can get to it from the ITC (Instructional Technology Center) that you can extend to that corner.”

Ondricka said that the library expects the net to be fixed “during the winter break.”

McKechnie said that pigeons are not the only creatures making their way into ARC’s buildings.

“We find wasps nests, we find those all over,” said McKechnie. “Obviously, we have skunks, feral cats, pigeons, rodents, termites, cockroaches. It’s an ongoing battle.”