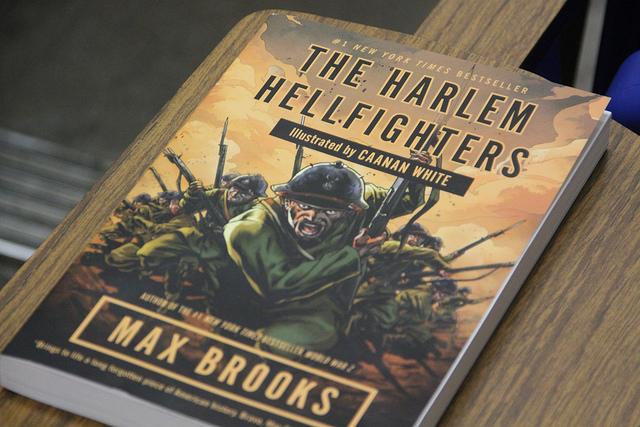 "The Harlem Hellfighters" was talked about at the RAD presents college hour. History professor Rudy Pearson spoke about what the Harlem Hellfighters did for America durning World War 1 and how they did not recieve the credit they deserved until many years later because they were African American on Oct. 15. (Photo by Emily Thompson)

In the R.A.D presents College Hour on Thursday, American River College History professor Rudy Pearson shared his insights and knowledge on WWI and the book “The Harlem Hellfighters” by Max Brooks.

The Harlem Hellfighters were the 369th Regiment in the U.S. army and one of the first African American military groups in WWI. They spent 191 days in combat, more than any other American troops.

“Pearson told us about the college hour in class and it sounded really interesting. I really wanted to see what the Harlem Hellfighters were all about,” said ARC student Andre Turner.

The regiment was longest-serving and most decorated U.S. unit in WWI. With two of their members receiving Croix de Guerre, an award given by the French to soldiers who distinguish themselves by acts of heroism involving combat with the enemy.

More than 3,000 African Americans served in WWI. But because of racial segregation back home, not many were able to fight on the front lines.

The Great Migration led African Americans to move north at the beginning of the war to work in factories that faced a shortage of workers. As a result, many started to build better lives for themselves in hopes of confronting the challenges of segregation.

Pearson explained how the segregation also occurred in the military.

The U.S. military created certain “tests” for African Americans to pass before entering the army.

These tests determined whether or not they would be competent to fight on the battlefield for the U.S.

Pearson explained how many African Americans did not pass these tests because of lack of education and the military saw them built for one thing: labor.

Although training prepared them for combat, African-American soldiers were put to work unloading ships.

As the war progressed, The French began to lose many of their own soldiers and needed help.

The French army took in the Hellfighters to help replenish their own ranks, finally giving them the opportunity to fight that the U.S. Army denied them.

The French were so surprised at how courageous they fought in the trenches and the Germans feared them because they had never seen anything like them before.

“They seemed to fight like hell … this gave Germans to dub the name ‘hellfighters,’” said Pearson. “They never lost a mile of trench their whole time of service.”

The Harlem Hellfighters hoped that what they did overseas would impact what was going on back in America.

Their heroism sparked new energy that gave way to the “Harlem Renaissance” and a change in civil rights for African Americans.

“The book was a little challenging for me, but the presentation really helped me understand who the hellfighters were. It is shocking how unknown they are,” ARC student Oksana Zavereukna said.