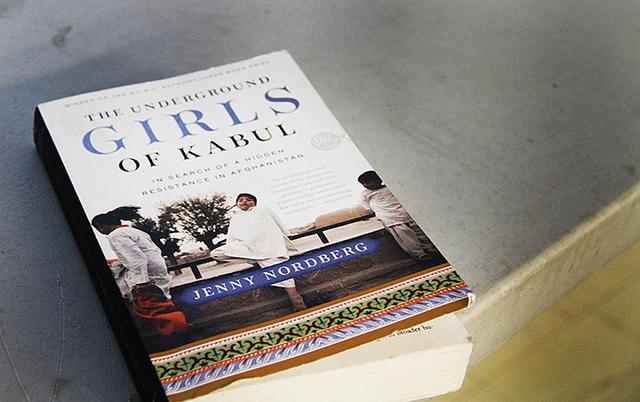 "The Underground Girls of Kabul" was talked about at a college hour on Thursday. The college hour discussed women and the inequality they are faced with in the developing world. (Photo by Ashley Nanfria)

In the developing world there is an extreme inequality between men and women when it comes to education, health care and rates of domestic violence.

In an honors reads college hour Thursday, American River College political science professor Alana Jeydel discussed the novel “The Underground Girls of Kabul: The Status of Girls and Women in the Developing World” by Jenny Nordberg, an investigative reporter.

“I have only heard a little about this book but I’m excited to learn more about it because I think this topic is something everyone should be aware about,” said ARC student Baylor Cook.

Central Africa, the Republic, Chad, Guinea-Bissau and Niger are the nations with the worst gender inequality, according to Jeydel.

Girls in the developing world on average only get educated up until primary school. After that it gets too dangerous when they start their menstrual cycle because they are more at risk for rape.

AIDS is very common in these places and it is thought by many that the cure for it is to have sex with a virgin, which puts teenage girls at more risk for rape.

Fifty-four out of the 144 secondary schools in the developing world have gender parity.

“Education is a basic human right and educated girls have more choices about their future and working,” Jaydel said. “Educated women is the best way to improve the economy.”

If women are more educated, they are more likely to get married later in life and have fewer children so they have more time to get a job and make a life for themselves.

Most women are only seen as objects to have children. The average women spends two-thirds of her time in between the ages of 17 and 35 either being pregnant or lactating.

Women do not have good health care in the developing world and it is very common for them to die from easily treatable health problems, especially pregnancy because they have so many kids.

Sex selective abortions are also very common in these places. They do this because they think girls are a waste of money.

Now, especially in China, men are finding it hard to find wives so they buy wives from other parts of Asia.

Women go through a lot of domestic violence in their homes from their husbands and mother-in-laws.

“It’s interesting to look at different cultures and have a better understanding on what’s going on outside of America,” said ARC student Sarah Spitzer on the college hour.

Emily Thompson is a first-semester student on the Current and the co-editor of the Scene section. She is majoring in journalism and plans to transfer to the University of North Carolina.

‘How to get a state job’ lecture given over spring break